Within each of the category one and category two resource potential categories the commodities are listed in order of criticality.

The assessments of resource potential in Table 1.5.1 are subjective judgements based on:

Seven of the commodities rated as having category two resource potential also are considered critical by the world's major economies (antimony, indium, lithium, molybdenum, niobium, tantalum, tungsten). Also in the category two group are six other commodities with a category two criticality ranking (beryllium, bismuth, graphite, manganese, tin, titanium). Only one other commodity, thorium, was assigned category two potential despite its category three criticality rating. This assessment reflects the possible growth in markets if emerging and new technologies using thorium (nuclear power generation) have greater rather than lesser uptakes in the medium to long term. The assessment also takes into account Australia's considerable resources of thorium. Helium was also assigned category two resource potential although it was not considered in criticality rankings.

Among the 12 commodities rated as having category three resource potential (Table 1.5.2), two are considered to be of category one criticality by countries (gallium and vanadium) and three of medium criticality (germanium, selenium and strontium). Many of these commodities are of small market size and/or have limited growth outlooks, and/or have low known and potential endowment in Australia. These judgements are a snapshot of the present situation which will change over time. 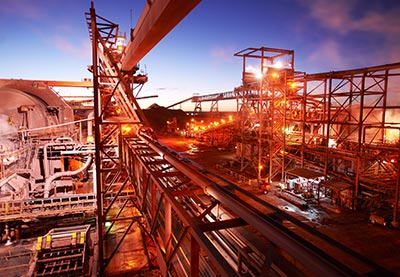 Olympic Dam is a multi-mineral ore body that is mined for uranium,
copper, gold and silver, but also contains significant amounts of
rare-earth elements and other critical commodities.
Image: BHP Billiton.

An important conclusion of this report is that most of the commodities assessed as having category one and category two resource potential are geologically associated with three mineral system groups. In addition, a fourth opportunity exists for critical commodities that can be produced as by-products from existing operations.

Australia also has major known resources of lateritic nickel, some of which are currently being exploited. There are potential opportunities to develop technologies for more efficient extraction of nickel and other associated elements such as scandium from these lateritic deposits.

Commodities associated with intermediate to felsic igneous-related mineral systems are varied. In detail the composition of magmas with which these systems are associated are also varied and include intermediate, evolved felsic and alkaline magmas. Unlike the mafic-ultramafic igneous-related systems, resources and production of commodities associated with intermediate to felsic magmatism are much more widespread, with Australia possessing significant resources of many of the associated critical commodities. At present, Australia is a major producer of copper and lithium, and in the past it has been a major producer of antimony, tantalum, tin and tungsten. Regions of current and historic production (some of which have significant identified resources) must be considered regions with significant potential for additional discovery (Figure 1.5.2).

In addition to commodities with historic or current production, Australia is emerging as a potential producer for commodities such as rare-earth elements and molybdenum.

The third mineral system offering category one resource potential for Australia is heavy mineral sands. Government supported work in South Australia was crucial in the identification and discovery of a major new mineral sands province, resulting in several currently operating mines. These mineral systems not only host major industrial commodities such as titanium and zirconium but also contain significant resources of rare-earth elements and thorium. Figure 1.5.3 shows the distribution of major historic and existing mineral sand operations in Australia.

Recovery of by-products from existing ores and concentrates

Several commodities are produced as co-products or by-products of major metal mining; platinum-group element recovery from some nickel ores is an example of co-production. Among those commodities assessed as having medium resource potential, antimony, bismuth and indium are by-products of base metal and/or gold mining, and lower resource potential by-products include cadmium, gallium, germanium, mercury, rhenium, selenium, tellurium and vanadium. The Olympic Dam deposit is one of the largest rare-earth element resources in the world, but at present rare-earth elements are not recovered. Where recovery is currently uneconomic, there may be improvements in mineral processing for ores containing significant concentrations of co-product and by-product elements.

For many Australian mines the minor-element compositions of ores and concentrates are not well known or not published. However, preliminary calculations in this study for several of Australia's base and precious metal ore bodies indicate the potential for substantial resources of elements such as antimony, indium cadmium, gallium, germanium, mercury, rhenium, selenium, and tellurium (see Part 2). In addition, it is known that gallium, germanium and rare-earth elements are enriched in some coal deposits (Dai et al., 2006; Qi et al., 2007; Seredin, 2005). Finally, phosphate deposits are a potentially important source of rare-earth elements as well as other metals such as uranium; Australia is relatively well endowed with phosphate deposits such as those in the Georgina Basin (Northern Territory and Queensland), but the minor-metal compositions of these deposits are not well understood. 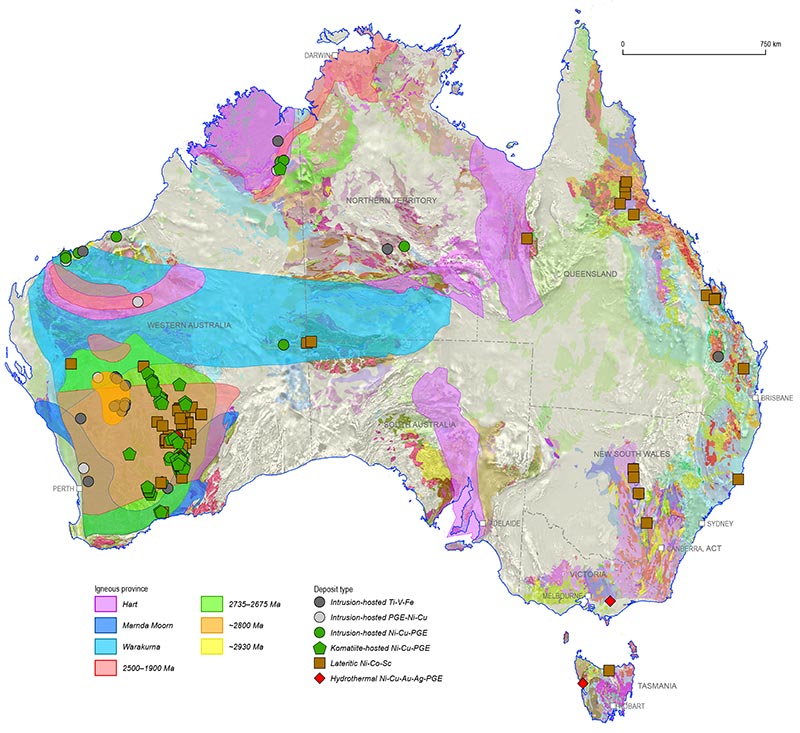 Figure 1.5.1: Distribution of mineral deposits associated with mafic-ultramafic magmatism (locations from OZMIN) and the exents of mineralised igneous provinces (from Hoatson et al., 2008, 2009; Claoue-Long et al., 2009). The background is transparent surface geology draped over reduced-to-pole aeromagnetic data. The legend for the surface geology is presented in Figure 1.5.5.

Figure 1.5.2: Distribution of mineral deposits associated with granitic and alkaline magmatism (locations from OZMIN). The location of the Kennedy Igneous Province is from Champion and Bultitude (2013) and D Champion (pers. comm., 2013). The background is transparent surface geology draped over reduced-to-pole aeromagnetic data. The legend for the surface geology is presented in Figure 1.5.5. Figure 1.5.3: Distribution of mineral deposits associated with heavy mineral sand placer deposits (from OZMIN). The background is surface geology. The legend for the surface geology is presented in Figure 1.5.5.

Figure 1.5.4: Distribution of operating of recently closed mines illustrating the existing and potential recovery of critical commodities as by-products. The background is transparent surface geology draped over reduced-to-pole aeromagnetic data. The legend for the surface geology is presented in Figure 1.5.5. 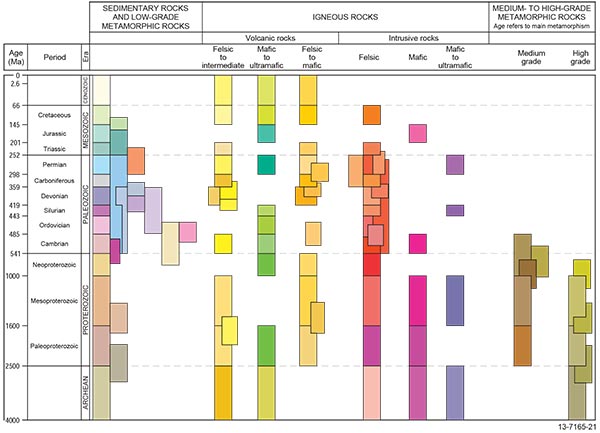