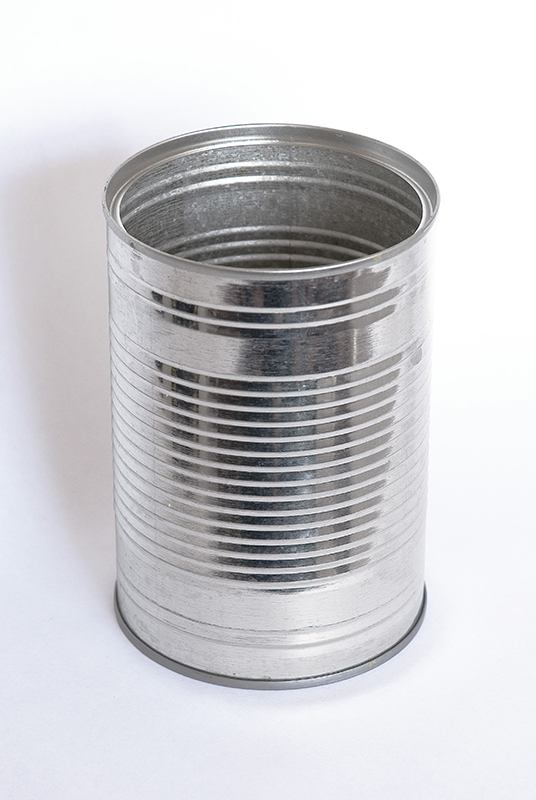 A tin can. Source: Wikimedia Commons

You might have heard of tin soldiers and tin whistles, but today a large use for tin is to line steel cans for packaging food. The largest use of tin is in solder (fusible metal alloy used to create a permanent bond between metal pieces). Tin is a relatively soft metal used in a range of alloys including bronze.

Tin is a white metal at room temperature which is soft and highly rust-resistant and fatigue-resistant. Tin is non-toxic and highly malleable (able to be shaped). Tin alloys easily with other metals, has a low melting point and is easy to recycle.

There are many important uses for tin. Most is used to produce tinplate, or steel coated with tin which is used for food packaging. Tin and tin alloys are used also for solder, especially in the electronics industry. It is commonly used as an alloy for bearing metal and as an alloy in metallic coatings.

A Chinese crossbow made of bronze and inlaid with silver. Source: Wikimedia Commons

Tin is one of the few metals that has been used and traded by humans for more than 5000 years. As tin is easy to melt, our ancestors were able to alloy tin with copper to make bronze. Tin was therefore an important metal in our history and development, taking us from the Stone Age to the Bronze Age. Bronze could be sharpened and used in tools and weapons. These uses led people to go in search of tin, venturing into other lands to trade goods.

About 300 BC, the Chinese developed a crossbow made from bronze, enabling them to defeat the Mongolians who were using ordinary long bows with less range and penetrating power. The Chinese were thus able to open up trade routes with Western Asia and Europe, ending 3000 years of Chinese isolation.

In the first century AD, the Romans used tin to make bronze items and lead-tin solder. They also used tin to make pewter items (like cups, plates and ornaments) made from 70% tin and 30% lead, which was dangerous given that lead is poisonous.

In 618 AD, tin was exchanged by Britain for corn from Alexandria, to help relieve a famine.

During the 18th century, pewter figurines were very popular to own, such as 'tin soldiers'. Also, in the late 18th century in China, tin was first beaten into thin sheets and used to line tea chests.

In 1795, Napoleon Bonaparte offered a prize for anyone who could find a way of keeping food fresh for longer (for his soldiers). A Frenchman called Nicholas Appert discovered that food boiled in glass bottles, then immediately sealed, would keep for several months. Then in 1810 an Englishman, Peter Durand, patented the first tinplate food container. In 1825, a ship carrying tinned foods (pea soup and beef) to the Arctic sank, yet nearly 100 years later some of the containers were recovered and the contents were still fresh enough to eat.

Cassiterite (SnO2) is by far the most important tin ore, although small amounts of tin are recovered from sulphide minerals such as stannite (Cu2FeSnS4).

Tin occurs in both primary and secondary deposits. Primary deposits are typically associated with granite intrusive rocks which form when magma bodies cool (solidify)  beneath the Earth's surface, rather than on it as in the case of volcanic rock. Primary deposits can occur within the granite or within pegmatities or aplites associated with the granite. Deposits occur also in rocks surrounding the margins of the intrusions as veins, disseminations, skarns or carbonate replacements generated by tin bearing fluids derived from the granite magmas. Carbonate-replacement deposits form some of the largest tin deposits in Australia.

Secondary deposits (placers) come from the weathering and erosion of primary tin deposits. Cassiterite is chemically resistant, heavy and readily forms residual concentrations. These concentrations may develop over a primary deposit (eluvial) and on slopes below the deposit (colluvial). When the cassiterite reaches a drainage system, it may be transported to a river channel and concentrated into an alluvial placer deposit. A placer deposit buried by younger sediments or lava is known as a deep lead. Deposits in oceanic submerged river channels are important sources of tin. More than half of the world's tin production is from deposits such as these, mainly in Malaysia, Indonesia and Thailand.

Australia does not produce large quantities of tin by world standards, but we do mine deposits of tin ore in Tasmania and, to a lesser extent, Queensland and Western Australia. Tin ore was first discovered in Australia in the 1880s and in fact the Renison Bell mine in Tasmania (named after George Renison Bell, the prospector and explorer who first staked a claim in the area) is one of the largest underground tin mines in the world.

More than 85% of Australia's economic tin resources are located at the Renison Bell deposit in Tasmania, a primary carbonate replacement deposit. This is Australia’s only significant producer of tin. Other Australian mines include Greenbushes in Western Australia, and deposits in the Herberton/Mount Garnet are of north Queensland.

Tin mining has had a long history in Australia. Important historic and more recent mining centres/deposits include Ardlethan and the Emmaville region (NSW), Cleveland and Mt Bischoff (Tas), Moolyella WA), , and the Herberton/Mount Garnet and Cooktown/Collingwood districts (Qld).

The world's economic resources of tin total approximately seven million tonnes, of which Australia has approximately 1.3%. Eastern Asian countries, including China (27%), Malaysia (15%), Thailand (12%) and Indonesia (10%) possess the majority of the world's economic tin resources. Other countries with large tin resources include Brazil (16%), Bolivia (6%), Peru (4%) and Russia (4%).

The main method of mining large placer tin deposits is by bucket-line dredging. The alluvium containing the tin is excavated and transported by a continuous chain of buckets to the interior of the dredge where it is washed and roughly concentrated. In South-East Asia particularly, smaller deposits, or those unsuitable for dredging (e.g. because the bedrock is very rough) are worked by gravel pumping. The alluvium is broken up by a high pressure jet of water and the resulting slurry is pumped to the concentrating plant.

The cassiterite rich slurry is further concentrated by gravity separation methods, which involve flushing the slurry with a stream of water over equipment such as jigs, spirals, or shaking tables. This separates the heavy cassiterite from the lighter minerals such as quartz, feldspar and mica. Impurities of unwanted heavier minerals, like iron oxides, are separated using magnetic or electrostatic separation. The end product is a cassiterite concentrate containing about 70% tin.

Vein and disseminated tin deposits are less common, and mined by similar hard rock mining methods used for other non-ferrous ores such as zinc. The ore is broken by drilling and blasting, transported to a processing plant where it is crushed and ground and then concentrated using gravity methods. The concentrate is usually of a lower grade (about 50% tin) than placer concentrate because of the fine grain size of the cassiterite and the difficulty of removing all the associated sulphide minerals.

The first step in processing the tin is ensuring that a suitable ore concentrate is formed. Tin ores that contain high sulphide mineral contents have to undergo an additional process, whereby the ore is baked at 500-600°C to burn the sulphur. Flotation is not as efficient for tin as it is for sulphide ores, it is becoming more frequently used to improve the amount of tin recovered from both primary ores and reprocessing to recover tin from processed waste material.

Once a suitable ore concentrate is produced, the tin is extracted from the cassiterite using a smelting method. Reverberatory furnaces are used to smelt the concentrate in a process that takes 10 to 12 hours. The furnace charge consists of a mixture of crushed cassiterite, a carbon source to act as a reducing agent, and a crushed limestone powder to act as a flux, all of which are heated to between 1200 and 1400°C.

The oxygen in the cassiterite will bond with the carbon source, reducing the cassiterite to tin, while the limestone acts as a melting flux, assisting in forming a molten solution, which will absorb many of the other impurities. The molten batch is tipped into a settler in which the heavier molten tin settles to the bottom while the slag, all the waste material, overflows into pots. The molten tin from the bottom of the settler is cast into slabs or “pigs” (each weighing about 34 kg) for refining. The cooled slag, which often still contains 10-25% tin, is crushed and re-smelted for additional tin recovery.

Tin produced by smelting concentrate or slag commonly contains metallic impurities which must be removed by refining before the tin is marketed. Refining techniques include heat treatment or electrolytic processes. Heat treatment is the more widely used method and involves heating the tin from smelters on an inclined hearth to a temperature just above the melting point of pure tin, but below that of the melting point of the impurities. The relatively pure molten tin flows into a kettle while the impurities remain behind forming a residue which is re-treated to recover more tin. As there is not a great demand for tin of extremely high-purity, the more costly electrolytic method is rarely used.

Tin concentrate produced at Greenbushes Mine (WA) also contains tantalum, niobium and antimony. The concentrate is smelted in an electric furnace and tantalum and niobium are recovered from the slag. The tin produced here retains a small amount of antimony and is used for alloys.