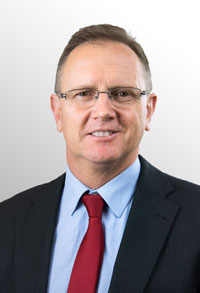 Dr Johnson has been the Chief Executive Officer of Geoscience Australia since April 2017. A geologist with over 30 years’ experience, including private sector mining and mineral exploration, Dr Johnson has led teams of geoscientists for over 20 years with a range of diverse achievements. Through the discovery of over 2 million ounces of gold reserves in industry, to national scale pre-competitive geoscience programs that have attracted exploration investment to Australia, these achievements have supported Australian industry and attracted exploration investment to Australia

Dr Johnson first joined Geoscience Australia in 2006 and in that time has been head of various divisions with diverse duties including carriage of energy and mineral programs. He has also been a member of the Board of the CO2CRC (CRC for Greenhouse Gas Technologies) since 2014 and the National Computational Infrastructure (NCI) at the Australian National University since 2017.

Dr Johnson has a Bachelor of Science majoring in Geology from the University of Sydney and a PhD from the Australian National University.

Dr Johnson’s vision for Geoscience Australia is one of unity in deploying geoscience for the economic, social and environmental benefit of Australians. He is driving a strong agenda of inclusiveness, particularly new programs to engage with aboriginal Australia.