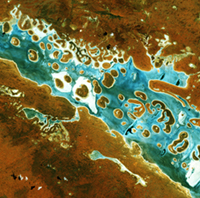 Australia will have assured access to reliable and operational satellite data from the European Union's Sentinel satellites under the terms of a technical cooperation arrangement signed between the European Space Agency (ESA) and Geoscience Australia on 30 March 2016.

The signing of this arrangement follows on from the Australian Government and the European Commission's 2015 commitment to work together to support the European Union's Copernicus Earth observation programme.

Under the agreement ESA will provide dedicated high-speed connections to enable Geoscience Australia to access data from the Copernicus Sentinel satellites. To make best use of this arrangement Geoscience Australia has been working alongside CSIRO, the National Computational Infrastructure Facility (NCI) and the state and territory governments as a consortium to build a data hub to support redistribution and analysis of Sentinel data within Australia and neighbouring countries. This collaboration takes advantage of the Australian Government's investments in science and research infrastructure to support the region.

Geoscience Australia's National Earth and Marine Observation branch head, Dr Adam Lewis explained that the signing of the arrangement is a milestone for Australia. "The Sentinels are a rich new data source that will allow Australian scientists and industries to find innovative solutions to national challenges. The higher resolution of these operational satellites will produce more accurate maps and measurements of our land, water and oceans. This will contribute towards improving agricultural productivity, promoting sustainable resource development and reducing the risk from natural disasters."

Lift off of Sentinel-2A from the
European Copernicus space
programme

Geoscience Australia and ESA's technical operating arrangement will also make it easier for European and Australian experts to cooperate on calibration and validation activities that are fundamental to ensuring users have access to high-quality satellite data and value-added products that they can trust.

Pier Bargellini from ESA's Copernicus Space Component Mission Management and Ground Segment Division said "Australia, through Geoscience Australia, CSIRO, and many other players, has long made a valued contribution to our calibration and validation activities. Australia's technical expertise, their world-class facilities, and the diversity of geographies they have access to, makes them a key player. Through this arrangement, we expect to see this grow even further, with Australia making a particular contribution to ensuring Copernicus data satisfies local and regional requirements."

Under the arrangement Geoscience Australia will also act as a coordinating point for European partners to access Australian in-situ data, which is made available through the efforts of many Australian Government agencies, research partnerships and universities.

Andreas Veispak, the European Commission's Head of Unit for Space Data for Societal Challenges and Growth, said "The European Union's Copernicus programme is about applications and services, and these applications and services are most useful when satellite and in-situ data are integrated. We welcome Geoscience Australia's commitment to act as a coordination point for access to in-situ data."