The Australian Aid-funded Pacific Sea Level and Geodetic Monitoring (PSLGM) Project (the Project) is working towards generating an accurate record of the absolute and relative sea level in 13 countries throughout the Pacific. This Project operates under the Climate and Oceans Support Program in the Pacific.

The network of sea-level stations in the Pacific was established in the early 1990s. The Project is focused on determining the long-term variation in sea level through observation and analysis of sea level using tide gauges (managed and operated by the Bureau of Meteorology (BOM)) and changes in the height of the land using Global Navigation Satellite System (GNSS) data (managed by Geoscience Australia (GA)) and levelling data (managed by The Pacific Community (SPC)).

In most cases, three types of measurement are necessary to assess whether absolute sea level is changing at a given point: tide gauge data, GNSS data and levelling observations.

Tide gauges do not measure absolute sea level variation as absolute sea level height refers to the height of sea level with respect to the centre of the Earth. Instead, they measure relative sea level variation. Relative sea level refers to the rise or fall of sea level with respect to a local reference point, for example the tide gauge sensor or a line etched into the pylon of a wharf. Relative sea level is what is experienced by people living on the islands and it will vary according to a combination of steric change (e.g. thermal expansion), eustatic change (e.g. ice melt) and changes to land height (e.g. subsidence, earthquake). At locations where the absolute vertical rate of movement of the tide gauge is negative, the impacts of sea level rise experienced may be compounded.

The GNSS data is captured using infrastructure managed by GA in each of the 13 countries and transmitted back to GA for analysis. GA computes the three dimensional position of the GNSS site every week with respect to the centre of the Earth. The weekly height component of the three dimensional position varies predominantly due to a combination of land motion (e.g. subsidence, earthquake) and atmospheric noise.

The differential levelling technique has been used for all surveys to compute the height difference between the GNSS site and tide gauge every 18 months in each country. This technique involves setting up a total station (surveying instrument) midway between two targets and computing the height difference between survey marks in the ground (see blue triangles in Figure 3).

To compute the absolute movement of the tide gauge, the analysis of the GNSS and levelling is combined together. This is done by:

NOTE: These results do not include information regarding sea level data. BOM is currently analysing and linking the absolute land motion data with tide gauge data to create an absolute sea level data set for Pacific Island countries to improve their understanding of sea level changes.

The bottom figure (TG) in each country tab shows the change in the absolute height of the tide gauge. The error bars show the 95% Confidence Interval. 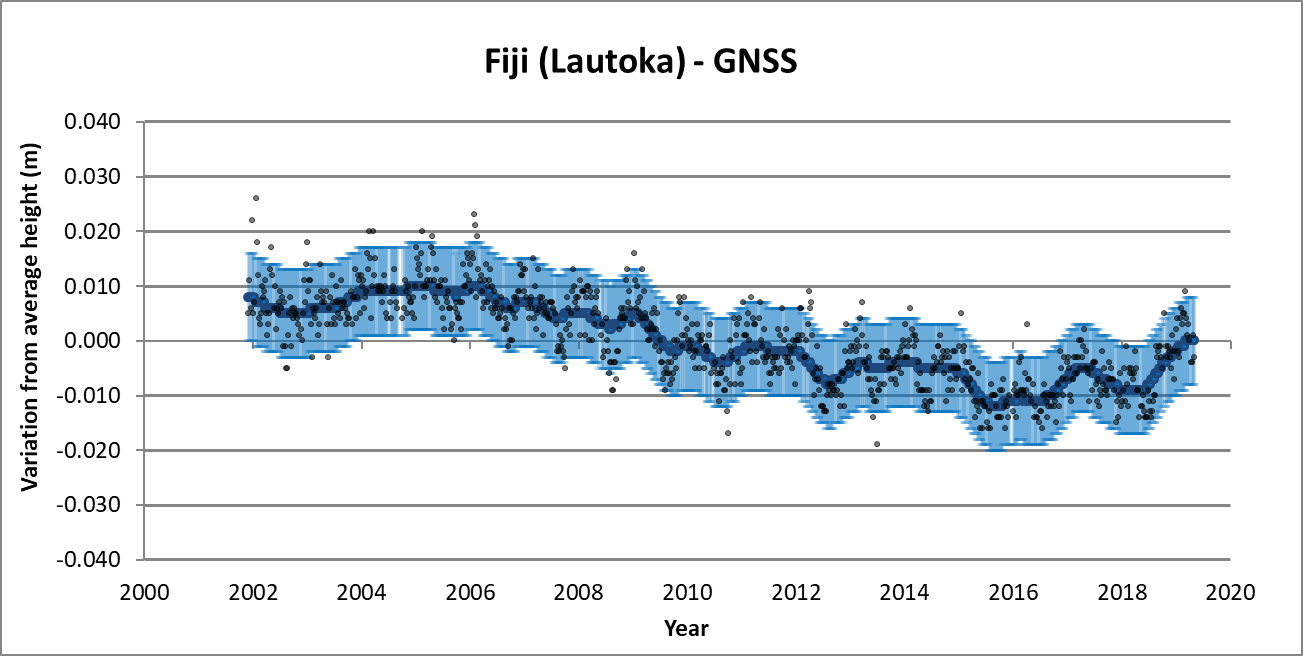 Republic of the Marshall Islands 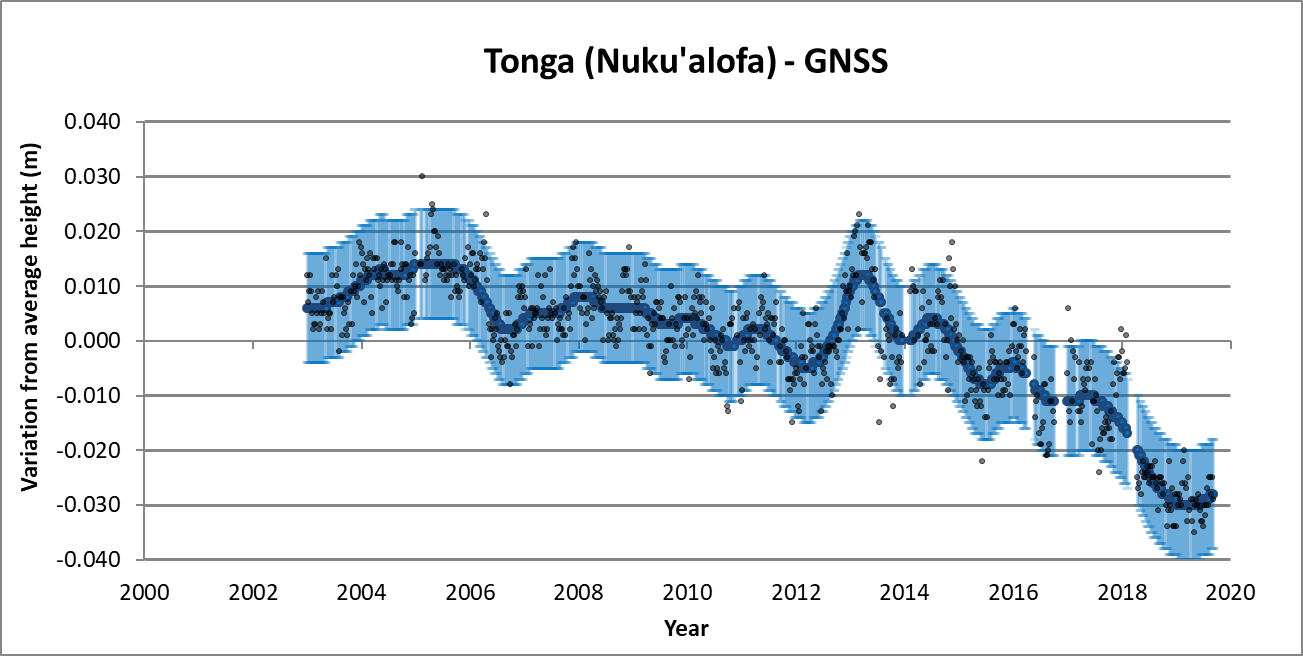 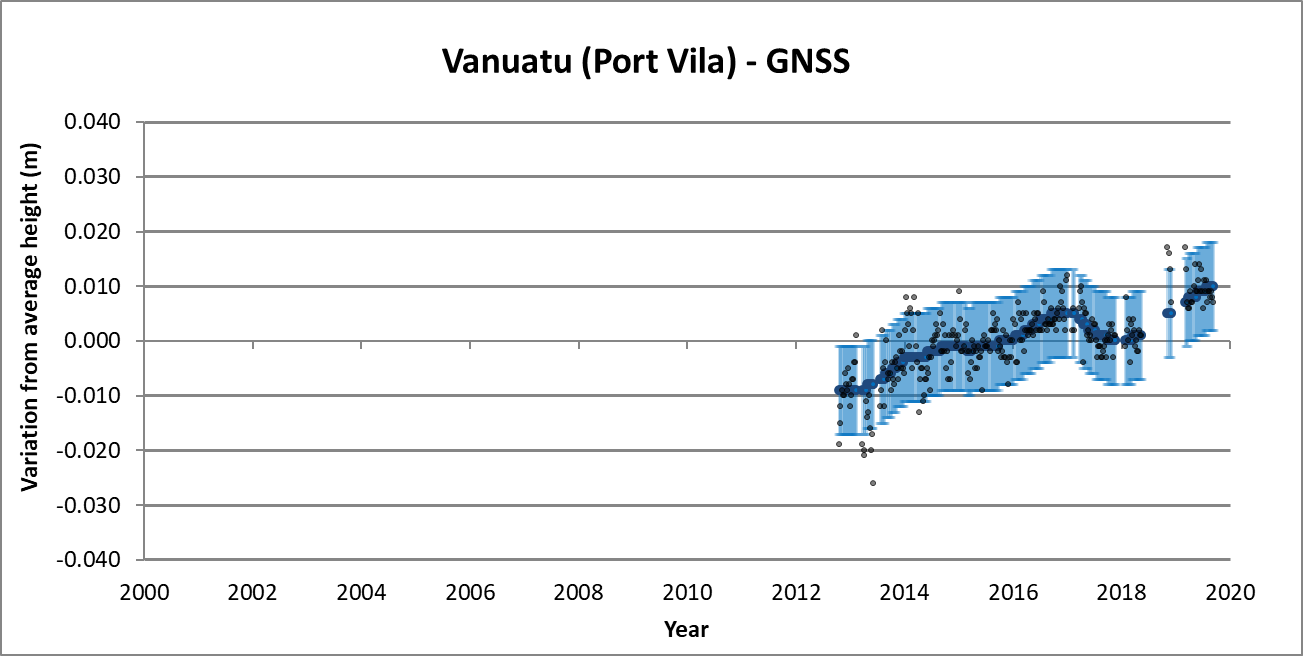