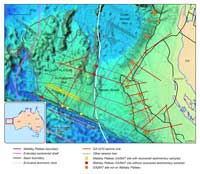 The Wallaby (Cuvier) Plateau is an expansive bathymetric high located 450km west of Carnarvon, Western Australia. It lies in water depths of 2200m to greater than 5000m and covers approximately 100 000km2 (Figure 1). The Plateau comprises a large bathymetric high in the southeast and a smaller high, Quokka Rise, in the northwest. It is bordered to the north by the Cuvier Abyssal Plain and in the south by the Perth Abyssal Plain. The Wallaby Saddle to the east is a bathymetric low separating the Wallaby Plateau from the western Australian margin. Two prominent volcanic ridges extend from northern part of the plateau into the Cuvier Abyssal plain (Sonja and Sonne ridges, Figure 1). The south-western parts of these ridges are embedded into the  Wallaby Plateau and to the north-east they extend into the oceanic crust of the Cuvier abyssal plain. The Plateau largely lies within the Australia’s extended continental shelf, ratified under the United Nations Convention on the Law of the Sea in 2008 by the Commission on the Limits of the Continental Shelf (Symonds et al., 2009).

Early studies assigned a variety of origins and characteristics to the Wallaby Plateau ranging from a largely continental body (Symonds and Cameron, 1977) to a volcanic buildup formed on oceanic crust (Veevers and Cotterill, 1978). Later studies based largely on the seismic reflection data and geodynamic reconstructions (Mihut and Müller, 1998; Symonds et al., 1998; Müller et al., 2002; Sayers et al., 2002) proposed that it is a composite feature cored by areas of extended continental crust that have been modified and blanketed by voluminous volcanic rocks. This volcanism occurred during the breakup between Australia and Greater India and the development of the lithospheric-scale Wallaby-Zenith Fracture Zone along the southern margin of the plateau (Figures 1 and 2; Symonds and Cameron, 1977).

In 2008-2009 Geoscience Australia conducted concurrent Marine Reconnaissance (GA-2476) and seismic (GA-s310) surveys over the Wallaby Plateau as part of the Southwest Margin acquisition program. The objective of these surveys over the Plateau was to assess hydrocarbon prospectivity of the region by searching for evidence of sedimentary depocentres. The Marine Reconnaissance Survey acquired 65 000km2 of high resolution swath bathymetry, magnetic and gravity data over the Wallaby Plateau and the Wallaby Saddle and collected lithologic samples from nine stations (Figure 1, 2 and 3). The seismic survey (GA-s310) acquired approximately 1 350 line km of 2D seismic, gravity and magnetic data. These new Geoscience Australia datasets significantly improved on sparse data coverage of the plateau and provided new evidence supporting continental origin of the plateau (Figure 1).

Swath bathymetry collected during Marine Reconnaissance (GA-2476) survey imaged the plateau with the highest resolution and greatest coverage to date. It has enabled identification and mapping of both large bathymetric features including newly named seamounts (Wallaby and Cuvier Seamounts) and smaller features like asymmetric ridges within Wallaby Zenith Fracture Zone and a linear rift valley across the Plateau (Daniell et al., 2010). The new seismic data enabled more detailed mapping of the main structural elements, inclding assessment of the thickness and distribution of stratified reflector sequences. 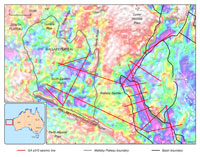 The main structural elements of the Wallaby Plateau include the Quokka Rise in the northwest, the larger bathymetric high in the southeast, the Sonja and Sonne Ridges which lie partly within the Plateau and partly on the Cuvier Abyssal Plain, the Wallaby-Zenith Fracture Zone separating the plateau from the Perth abyssal plain and a rifted basin in the southern part of the plateau (Figure 1).

The shallow parts of the Quokka Rise and the plateau’s south-eastern high correspond to structurally elevated areas of chaotic discontinuous seismic reflectors interpreted as basement highs (Figure 4). Thick and laterally extensive divergent dipping reflector sequences (DDRS) are mapped from the seismic on the flanks of these highs (Figure 4). Gravity modelling of the new data suggests that the Quokka Rise and the south-eastern high are likely to be underpinned by one or multiple blocks of continental crust (Goodwin, in prep).

The DDRS have geometric affinities with Seaward Dipping Reflector Sequences (SDRS) described by Symonds and others (1998). SDRS drilled on the Vøring margin are represented by alternating layers of lava flows and volcaniclastic sediments (Planke et al., 2000; Symonds et al., 1998). Based on the seismic character SDRS were interpreted on the Wallaby Saddle.

DDRS are similar to SDRS in seismic character which may indicate similarity of origin and composition. However, velocity structure of the DDRS is faster than that of the SDRS on the Wallaby Saddle (Goncharov and Nelson, 2010). Moreover, samples of sedimentary rocks collected in localities, where DDRS are imaged on the seismic, contain forams older than the onset of spreading on this part of the margin (Quilty, 2011; Daniell et al., 2010). Therefore, the Wallaby Plateau DDRS are interpreted to be composed of clastic sedimentary and volcanic lithologies. Thermal uplift of the inboard region preceding the breakup may have resulted in erosion of the basement and pre-existing sedimentary successions.

The south eastern high is partially intersected by a large rift valley extending from the plateau’s southern margin about 100km to the north east. This large rift valley likely originated as a failed rift during the initial stages of opening of the Perth abyssal plain. The rift valley is 5 to 23km wide and clearly imaged on several seismic lines (Figure 4). The valley is bounded by steep basement faults and underlain by half-graben structures with syn-rift growth sections. The rift valley has overall symmetrical structure with the central horst block separating eastern and western half-graben (Figure 4). The age of the syn-rift succession post-dates the formation of DDRS sequences. The prominent topographic expression of the failed rift may indicate slow erosion rates or recent reactivation of the structure.

The Sonja and Sonne Ridges are volcanic buildups related to Cuvier Abyssal Plain sea-floor spreading (Falvey and Veevers, 1974). These ridges are interpreted as extinct spreading ridges (Mihut and Müller, 1998; Robb et al., 2005). The improved bathymetric data over the southern portion of the Sonne Ridge collected during the Marine Reconnaissance survey (GA-2476) reveals that on the Cuvier Abyssal Plain this ridge is composed of a dense cluster of small seamounts and on the plateau it forms large shield volcanoes (Daniell et al., 2010). Seafloor magnetic lineations indicate that the Sonja Ridge formed between about 130 and 125 Ma and the Sonne Ridge formed at about 126 Ma (Fullerton et al., 1989; Mihut and Müller, 1998; Robb et al., 2005).

The Wallaby-Zenith Fracture Zone formed as a transform margin when Greater India moved past the plateau in the Cretaceous (Veevers and Cotterill, 1978). Steep escarpment along the plateau’s southern margin (Figure 1) is a bathymetric expression of this fracture zone. This escarpment is about 360km long and has up to 2km of vertical relief. During seafloor spreading along this margin several offset ridges 50 to 800m high and 125 to 200km long formed sub-parallel to the main scarp (Nelson et al., 2009).

The Wallaby Plateau basement is not well imaged on seismic data. Acoustic basement has been interpreted below the DDRS and below the post-rift succession within structural highs (Figure 4). The basement may correspond to the metamorphic and igneous Proterozoic rocks similar to those of the Northampton Block or to the Palaeozoic successions of the Gascoyne Platform (Symonds and Cameron, 1977). Over most of the plateau thick DDRS overlie the acoustic basement. These packages are up to 3.4 s Two Way Time (TWT) thick and have not been correlated to any known stratigraphy. They may be composed entirely of breakup-related volcanic flows and volcaniclastics the same as the SDRS, in which case they are likely to have formed within about the first 5 myrs after the breakup (Colwell et al., 1994; Eldholm and Grue, 1994; Symonds et al., 1998). Alternatively they may be composed of sedimentary rocks equivalent to Paleozoic-Mesozoic successions of the adjacent Houtman Sub-basin (Perth Basin) covered by a relatively thin layer of volcanic rocks. An Oxfordian foraminifera found in one of the dredge samples from DDRS succession (Daniell et al., 2010; Quilty, 2011) indicates possible sedimentary origin of these packages.

The syn-rift package mapped below the breakup unconformity within the failed rift valley in the central part of the plateau (Figures 4) is characterised by low amplitude continuous reflections with clear growth geometries against the basement-involved faults. The unit is up to 0.75 s TWT thick and could have accumulated as early as the onset of breakup or later when the ridge crest in the Perth Abyssal Plain was close to the current location of the rift valley.

The post-breakup succession on the Wallaby Plateau is laterally extensive and has a maximum thickness of about 0.650 s TWT. It has been correlated with Lower to Upper Cretaceous successions of the Southern Carnarvon Basin and likely includes shallow-marine clastic units at the base overlain by largely carbonate deep-water succession (Symonds and Cameron, 1977; Colwell et al., 1994).

Hydrocarbon potential of the Wallaby Plateau has been assessed using new Geoscience Australia seismic, potential field and sampling data. Gravity modelling confirmed that the plateau is largely underpinned by continental crust, however, it remains unclear whether any substantial sedimentary basins are present (Goodwin, in prep). The evidence for the sedimentary versus volcanic origin of the DDRS remains inconclusive and even if they prove to be largely sedimentary, remote location, deep water and the extensive breakup-related volcanics present high risk for the exploration. Thus, the potential prospectivity of the area is considered to be low.

The Wallaby Plateau is a vast geologically complex province, which to date has had only reconnaissance style assessment. Its prospectivity might be upgraded provided new evidence for the presence of sedimentary basins is found allowing correlations to be made with stratigraphy of the northern Perth and southern Carnarvon Basins.

Figure 4. Example of an interpreted
seismic line across the Wallaby
Plateau
© Geoscience Australia