Recoverable resources, however, provide a more accurate assessment of coal endowment as it includes losses that occur during mining and processing. As at December 2020, Australia’s total recoverable Identified Resources of black coal were estimated at 163,330 Mt, of which recoverable EDR were 74,147 Mt (Figure 2). Australia is ranked fourth, globally, for economically demonstrated black coal resources after the United States, China and India.

At December 2020, the total recoverable Identified Resource of brown coal was estimated at 436,652 Mt, of which recoverable EDR were 74,039 Mt (Figure 2). Australia is ranked second, globally, for economic demonstrated brown coal resources, behind Russia and followed by Germany and USA.

In Australia, black coal is produced in Queensland, New South Wales, Western Australia and Tasmania with the majority exported to overseas markets. By the end of 2020, export earnings from black coal totalled $43.37 billion, down from $63.94 billion at the end of 2019 (Department of Industry, Science, Energy and Resources, 2022). Japan and other Asian countries are prime destinations for Australian coal. 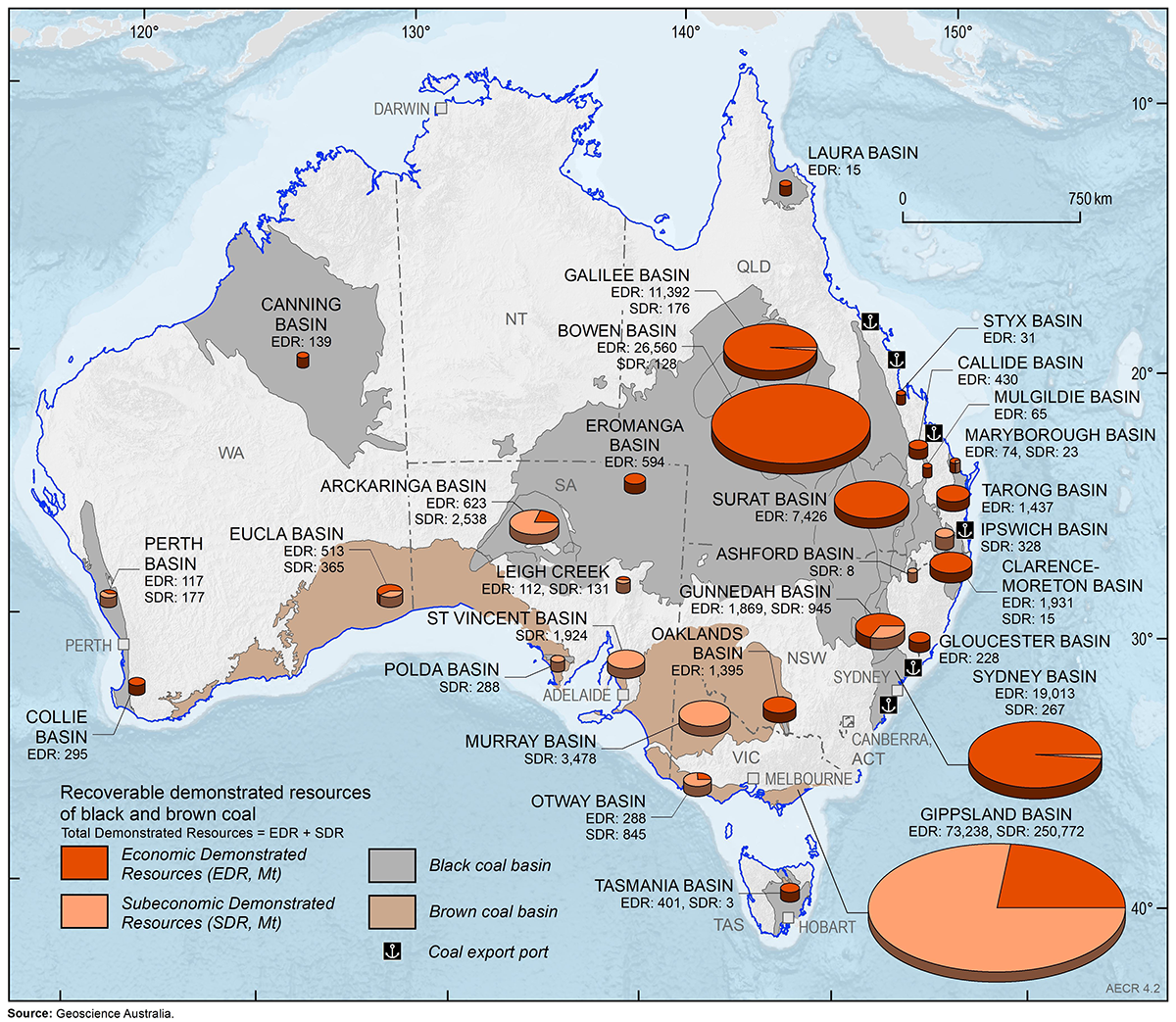 A range of coal quality specifications are preferred for different markets. The specific energy of the coal is the amount of coal required to produce a given heat output—an important parameter for the thermal coal market. Ash is the non-combustible portion that remains when coal is heated at a high temperature, and coal naturally has a certain moisture content. Both ash and moisture dilute the amount of energy that a coal can produce. Coal ash creates extra costs due to the requirement for its capture and disposal, whereas moisture content increases the relative freight cost per unit of energy. Other important coal quality parameters include sulphur, volatile matter and carbon levels (Coalfield Geology Council of New South Wales, 2011).

In 2020, the estimate of Australia’s recoverable EDR of black coal was revised downwards from 75,428 Mt to 74,147, a decrease of 1,281 Mt, or 1.7 per cent, from the previous year. Despite the overall decrease, additions to EDR came from Queensland’s Bowen Basin at Peak Downs (BHP Mitsubishi Alliance) and Winchester South (Whitehaven Coal). Additional Inferred Resources came from Queensland’s Bowen Basin at Curragh (Coronado Resources). 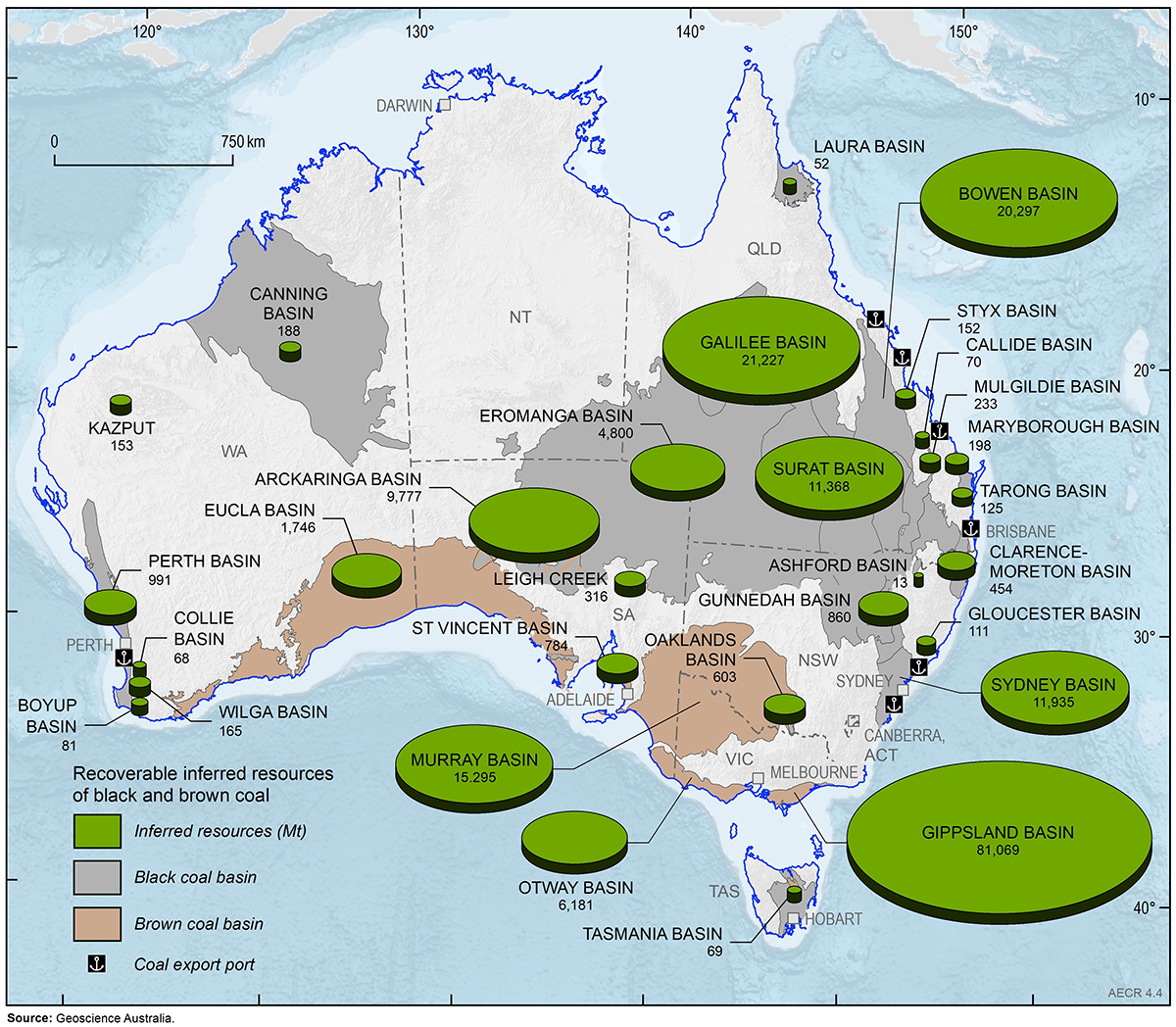 In 2019–20, Australia’s production of saleable black and brown coal was 12,742 PJ, which accounted for 54 per cent of total energy production (including uranium production; Department of Industry, Science, Energy and Resources, 2021a). Over the past decade, coal production has grown by an average annual rate of 2 per cent, moderated by a fall in production in 2010–11 due to flooding in Queensland and again in 2019–20 due to the impact of COVID-19 on global demand (Figure 7). In 2019–20, 90 per cent of Australia’s black coal energy production was exported (Figure 8). 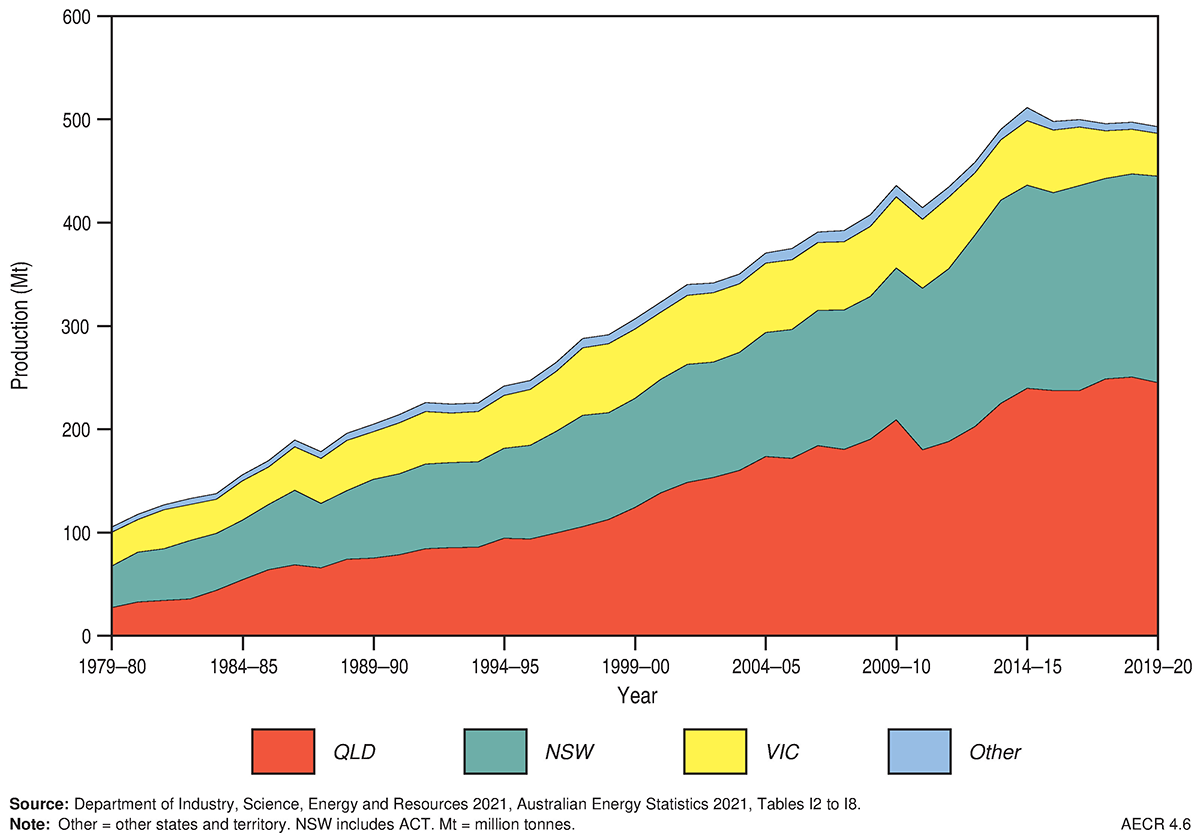 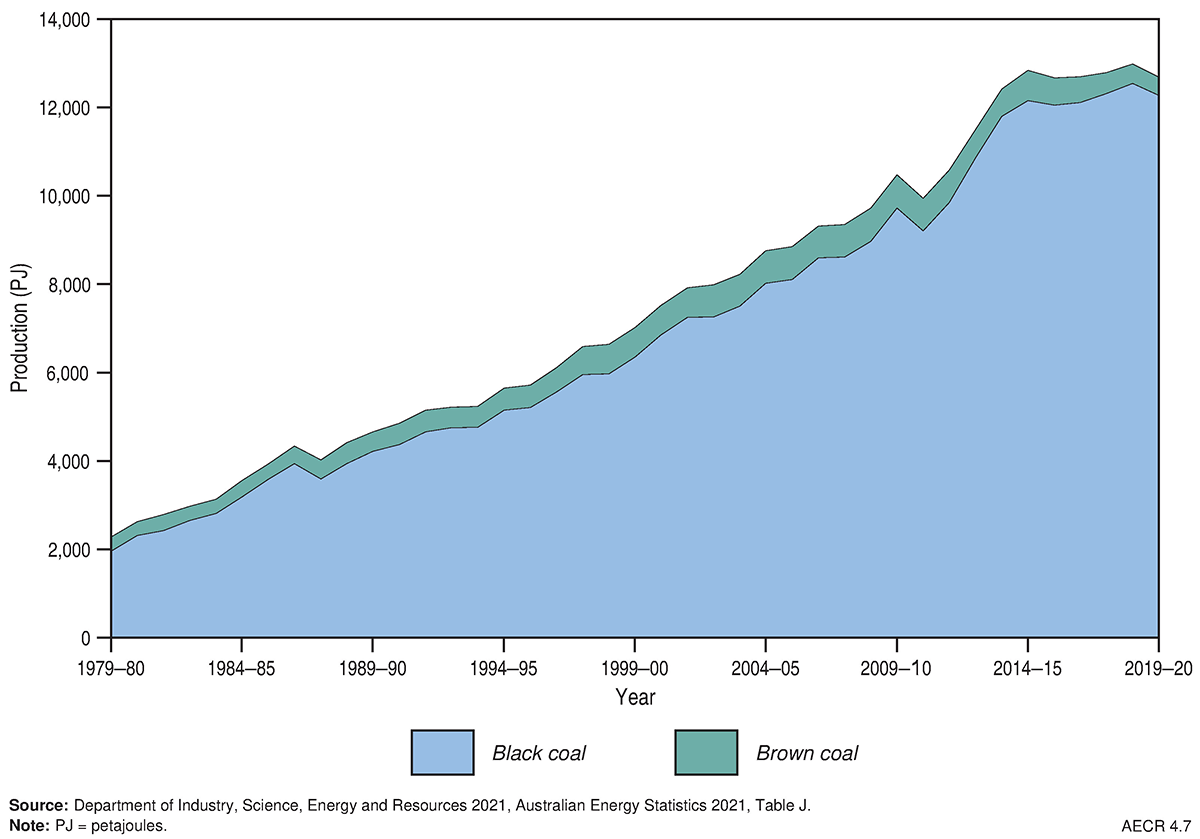 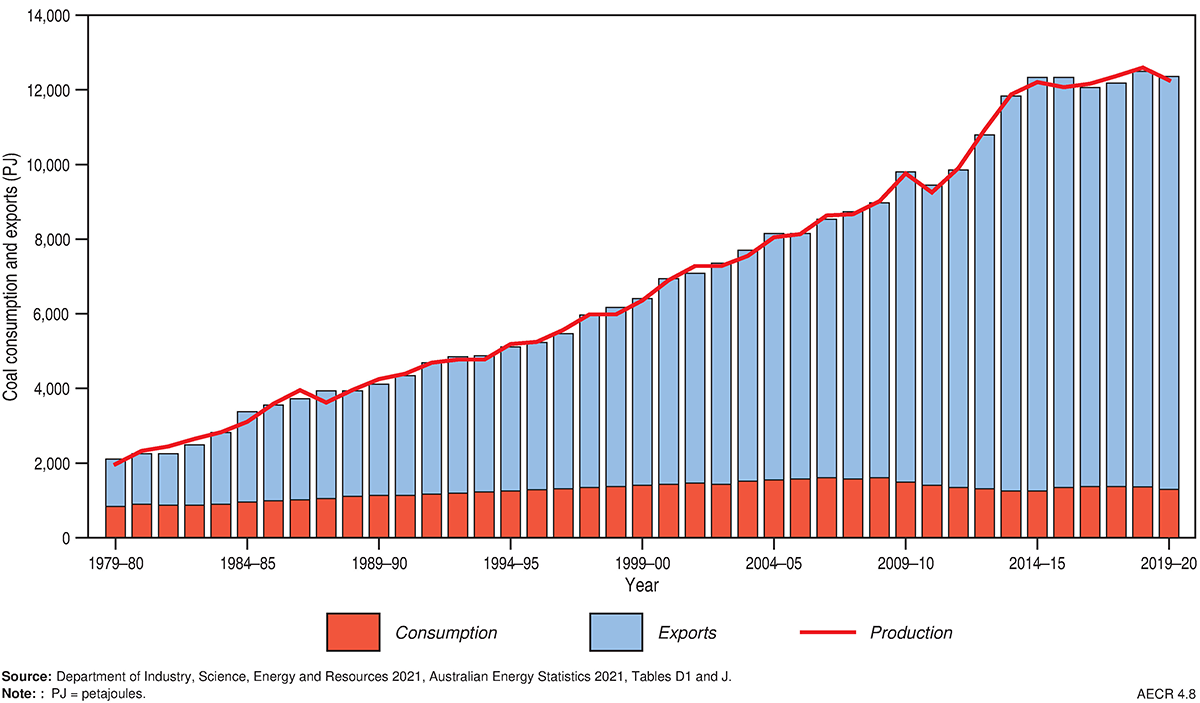 Australia exports the majority of its coal, capitalising on its abundant coal resources and strong ongoing coal demand from Asia. Australia exported 11,062 PJ of coal and coal products in 2019–20, which was about 56 per cent of Australia’s total energy exports (including uranium exports; Department of Industry, Science, Energy and Resources, 2021a). The total value of coal exports declined by an average growth rate of 1.1 per cent per year from $43.8 billion in 2010–11 to $39.2 billion in 2020–21 (Figure 9).

In 2020, the Newcastle thermal coal spot price averaged US$58/t, compared to US$74/t in 2019, and the Australian east coast premium hard coking coal spot price averaged US$125/t, compared to US$179/t in 2019 (Department of Industry, Science, Energy and Resources, 2020 and 2021b). Whilst export volumes to China have declined, exports to Japan remained high and volumes to India, South Korea and other destinations have continued to increase (Figure 10). Coal export volumes have grown at an average annual rate of 2.5 per cent from 285 Mt in 2010–11 to 363 Mt in 2020–21. However, Australia’s total coal exports decreased by about 4.3 per cent in 2020 (bp, 2021) in response to a global decline in steel production due to COVID-19 restrictions. Some of this loss has been offset by increasing exports to India, Bangladesh, Pakistan and the Middle East. Coal exports are projected to rise as global supply chains adjust and energy markets prioritise access to high-quality coal (Department of Industry, Science, Energy and Resources, 2021b). Figure 9. Historical trends in the volume and value of Australia’s coal exports 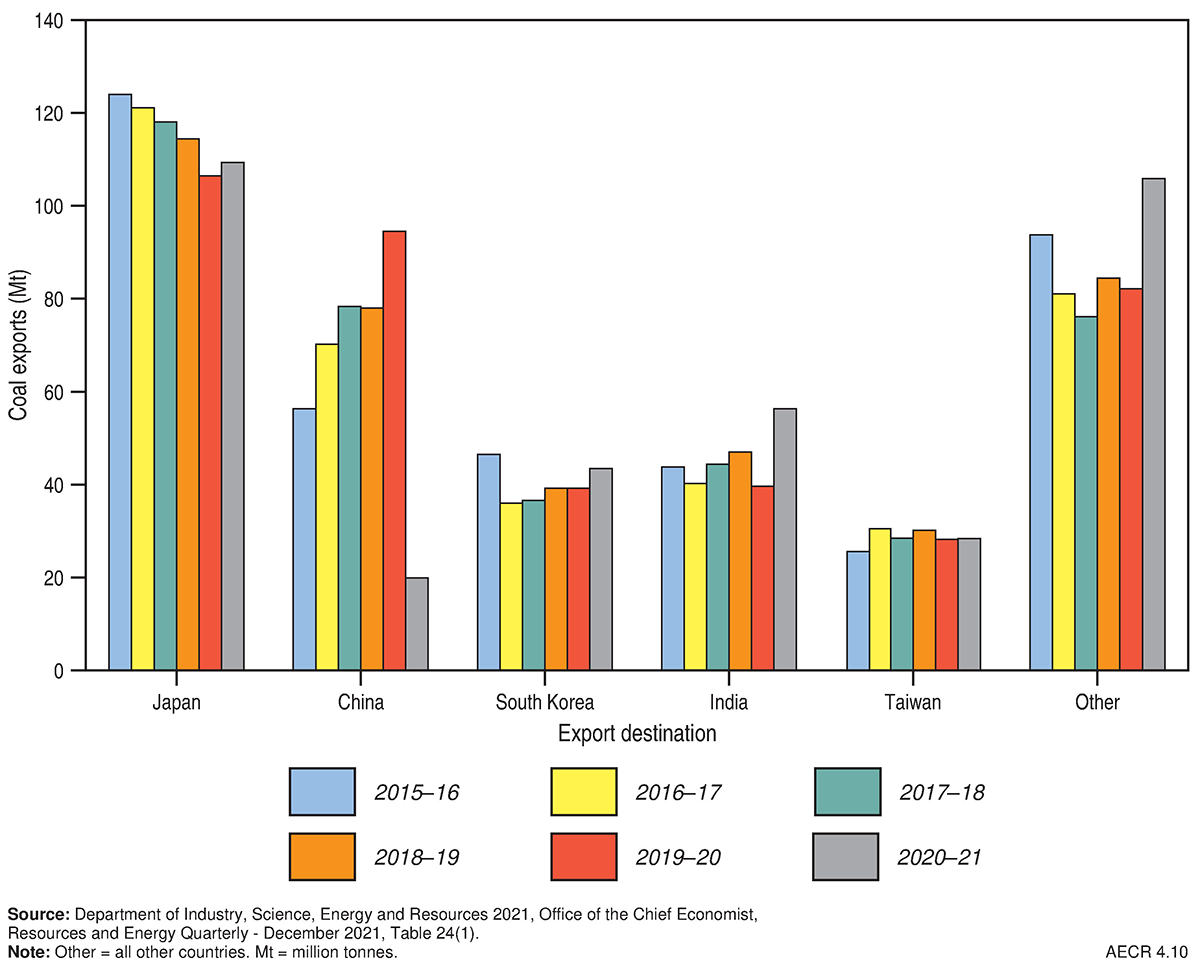 Department of Industry, Science, Energy and Resources 2021b. Resources and Energy Quarterly: March 2021 (last accessed 26 May 2022).