Emerald is one of the gem varieties of the mineral beryl. They are highly valued stones used for jewellery. Gems generally get their colour because of certain trace metals or impurities contained in the mineral, and in the case of emeralds, they contain traces of chromium, or sometimes vanadium, giving them an intense green colour. Gems of lighter green colour (and sometimes even yellowish colour) are referred to as green beryl.

Other varieties of beryl include: 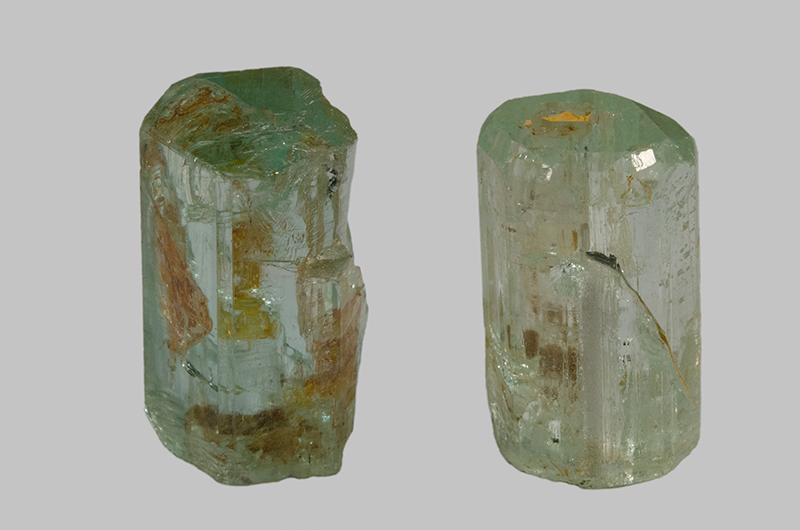 Emeralds are made from beryllium aluminium silicate. Although emeralds are hard, they can break relatively easily due to imperfections in the crystals such as trapped water, gas, small fractures or inclusions of other minerals. However, unlike many other gemstones, these impurities, do not detract from the value of a stone. Some crystals from Torrington in New South Wales show colour zoning. These gems are mostly clear beryl with bands of emerald in them. Often these gems are cut to enhance the banding effect.

Crystals of beryl can reach a great size. According to the Guinness Book of Records, the largest emerald (in matrix) was found in Madagascar. It is 1.25 m long and weighs 536 kg. Many of the largest crystals have come from the eastern Andes in Colombia and Bahia in Brazil. 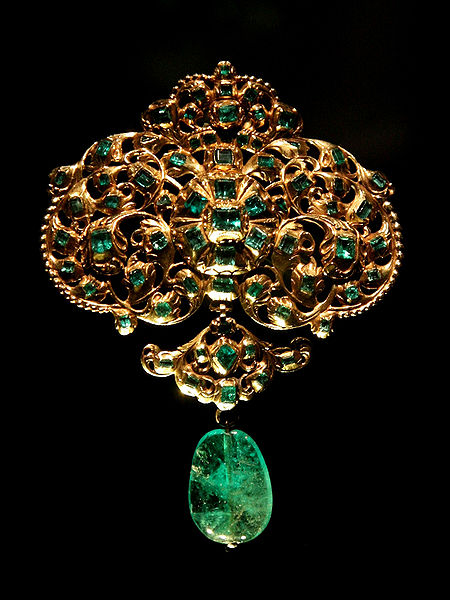 Gem-quality beryl and emerald is used in the jewelry trade.

Beryl can also be used to as a source of beryllium, a high-strength, lightweight metal with a high resistance to corrosion. Beryllium has a wide variety of applications, including the manufacture of electrical equipment, nuclear reactors, electronic components and aerospace components. The beryllium extracted from beryl crystals at the Triple Chance mine, Broken Hill were used by NASA for the Apollo Space Program.

Emeralds have been prized for thousands of years and feature in myths and legends from many cultures. There is evidence that emeralds were sold in Babylonian markets over 4000 years ago. In Greek mythology, Hermes gave a giant emerald as a gift for Aphrodite and in the Hebrew tradition an emerald was one of the four precious stones given to Solomon.

One of the most famous collections of gems, including emeralds, was owned by the Ancient Egyptian queen, Cleopatra, over 2000 years ago. Cleopatra owned the emerald mines of Egypt which were taken over by the Romans after her death. The Romans continued to mine for emeralds until the sixth century AD.

The Egyptians also believed the gems could cure eye diseases and that the green colour of emeralds represented fertility and rebirth. For that reason, emeralds were placed at the throat of a mummy for protection during the journey into the underworld and to ensure the deceased person would have strength when they were reborn in the afterlife. In India, emeralds were revered so much that they were inscribed with sacred text and worn as talismans by the elite, including Shah Jahan, builder of the Taj Mahal.

Emeralds from Colombian mines were being used by people from Mexico, Peru and Chile by about 1000 AD. In the mid-1500s, the Spanish forcefully took over several of the larger mines in Colombia, including the largest producing mine, Muzo, from local tribes. They enslaved and killed many of the locals in the process. By the mid-1600s the Spanish had brought South American emeralds to Europe and across Asia. In 1985, divers recovered 2000 Colombian emeralds from a Spanish galleon that had sunk in 1622. Emeralds from the Muzo mine, Colombia. Source: Wikimedia Commons

Muzo mine in Colombia is still known for having a murderous reputation. Crime related to emeralds from the mine, was prevalent during the 1970s and 1980s.The esmeraldos, or emerald bandits, who live in the hillsides around the mine, were often involved.

The 341 kg Bahia Emerald has also been the centre of international controversy. It was discovered in Brazil in 2001 and is comprised of 9 crystals ranging in size from 22 cm to 3.7 cm long. It was moved to USA and eventually seized by Los Angeles detectives in 2008 after a gem dealer reported it stolen. The emerald is now locked away due to ongoing disputes over ownership. There were nine men, one woman and three corporations that claimed to own the emerald. In addition, the government of Brazil claimed that the stone was mined illegally and should be returned. The Bahia Emerald has been the subject of many books, a graphic novel and National Geographic documentary.

In Australia, emerald and green beryl was first mined near Emmaville in New South Wales in 1890. However, only a small proportion of the beryl extracted was of good quality so the mine closed in 1897. Small-scale mining and prospecting continued from 1908 to 1963 with little success. The Triple Chance mine near Broken Hill operated from 1960 until 1990 and was known for its large yellow beryl crystals, some over a metre in length, although not of gem quality.

In Western Australia emeralds were discovered near Poona in 1912 in metamorphic rocks (mica schist) and pegmatite. Small-scale mining operations and prospecting has been occurring intermittently at Poona since then, including the development of the Agha Khan Mine in the 1940s. Underground mining began at the Agha Khan Mine in 1979, but ceased in 1980 due to mining problems and a lack of quality gems. The Menzies deposit was discovered in 1974 and irregular mining has taken place since then. In Australia, emerald is associated with granite pegmatites and metamorphosed rocks called schists. It is also sometimes associated with altered limestones or can be found embedded in calcite or quartz. A pegmatite forms when a magma cools, leaving some elements behind in the remaining fluid. Emerald crystals may grow when the remaining solution cools as long as the necessary elements are present, including beryllium. Emeralds can also form in veins in the crust from hot liquids that escape from a deeper magma.

Synthetic emeralds are referred to as ‘created emeralds’ and have been produced by flux-growth or hydrothermal processes. In the flux-growth process, crystals are created by dissolving chromium, beryllium and other elements in a molten flux and allowing crystallisation to occur on a seed of beryl. The flux is comprised of chemicals that stay liquid at high temperatures, such as lithium oxide, molybdenum oxide and vanadium oxide.

The hydrothermal synthesis technique involves dissolving components in an acidic solution at high temperatures and pressures, with crystallisation occurring in a cooler chamber. A method has also been developed for producing an emerald overgrowth on colourless beryl.

The mineral beryl occurs throughout Australia. However, generally the crystals are not gem-quality so most mining is conducted to extract beryl as a source of beryllium. The New England area of New South Wales has produced most of the gem-quality beryl, emerald and aquamarine. The largest deposit is found in the Emmaville area, but there are deposits near Inverell, Dundee and Glen Innes. In the early 1900s over 53,000 carats (10 kg) of beryl and emerald were produced over 20 years in this area. An attempt at commercial mining took place at Torrington in the early 1990’s but didn’t continue because of the low quantities of gems produced.

Nearly all production of emerald in Western Australia has been from a deposit at Poona but there are beryl and emerald deposits at Menzies and in the Pilbara region, south of Port Hedland. Mount Isa in Queensland has beryl-bearing metamorphic rocks and, small volumes of aquamarine have been found near Mount Surprise in Queensland and Olary in South Australia.

Most industrial beryl production from New South Wales has been from pegmatites in the Broken Hill area, but beryl has also been extracted from gravels near Black Range, Albury, Ophir, Cooma, Bungonia, Kiandra and associated with alluvial tin deposits at Stanborough, Tingha and Copes Creek.

Emeralds have been commercially mined in Australia in three main deposits Poona and Menzies in Western Australia, and Emmaville in New South Wales. The emeralds are usually in rocks among layers of other minerals such as mica. Open pit mining or terrace mining are the most common methods. Miners dig a pit with shovels, excavators or other earth moving equipment, depending on the scale of the mine. If the emerald-bearing ore is beneath a substantial cover of soil and rock, explosives might be used to remove this material. Sometimes high pressure water is used to blast the rock to reveal mineral bearing rocks. Tunnels are also used to extract emeralds from deeper rock layers.

Emeralds are removed from the exposed zone using hand chisels. In some larger mines security staff transport any emeralds recovered from the mine to processing facilities in a locked box.

Screens are used to sort the emeralds by size and then silt and clays are washed away to expose the emerald-bearing schist. No other chemicals are used in this process. Any schist or other rock still attached to the emerald is removed manually in a process called cobbing. Higher quality materials can be cleaned using high-pressure air.

Emeralds usually contain many cracks, fissures, and inclusions — for this reason, most emeralds are immersed in oil to reduce the visibility of the inclusions and improve clarity. Emeralds can be cut into many shapes, or even carved, but, because they are brittle, they are often cut into a rectangular shape. The ‘emerald cut’ is designed to minimise breakages of the crystal in corners, while emphasising the colour of the gem.