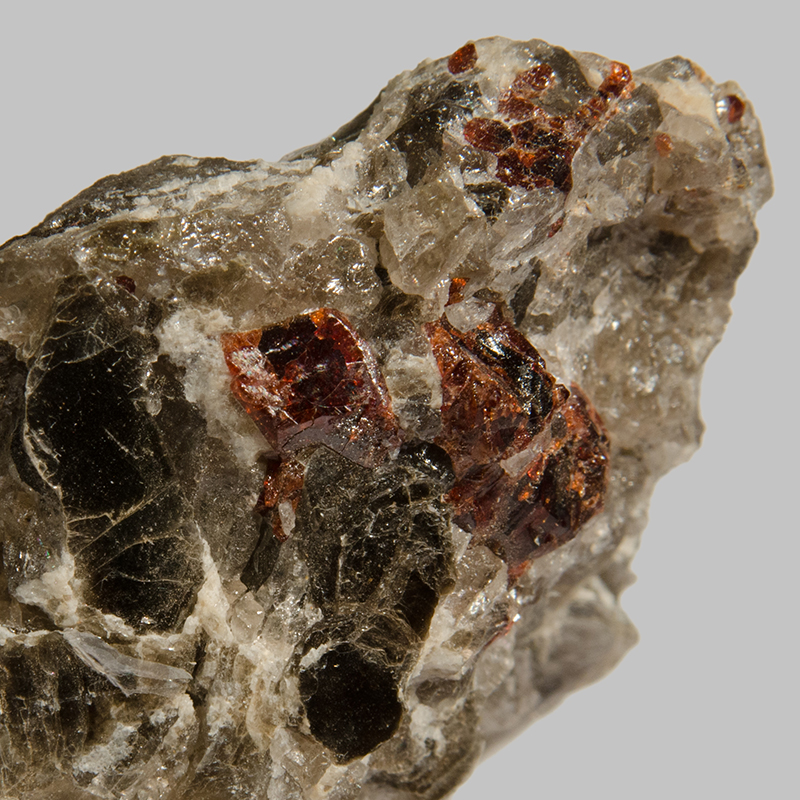 When you think of a garnet, you may think of a deep-red coloured gem. However, not all garnets are red. There are many different types of garnets and they can be any colour or even colourless. Garnets range from the gemstone-quality transparent specimens, to the opaque varieties used for industrial purposes.

Garnets are opaque, transparent to translucent minerals that can be found as individual crystals, pebbles, or clumps of inter-grown crystals. Garnets are most commonly found with reddish shades, but can be, orange, yellow, green, purple, brown, blue, black, pink, and colourless. Blue garnets are very rare. Sometimes the crystals have alternating layers of lighter and darker colours.

Garnets with inclusions can have a star-shaped pattern of reflections or appear to change colour under different types of lighting. Almandine garnets are the most common and are frequently used as a gem. Garnet crystals nearly 1 metre in dimeter have been reported from Gore mountain garnet mine in USA.

There are six main types of garnet, all with slightly different chemical compositions. All kinds of garnet can form in the same place and sometimes garnets can be a combination of types e.g. pyrope-almadine or pyrope-spessartine. Garnets have been used since the Bronze Age as gemstones for jewellery and ornaments and as abrasives. Because garnet is so hard and resistant to weathering, it can be used as skid-resistant road aggregate, skid resistant paints, and for filler in concrete being used in harsh environments. Garnets are used for industrial blast-cleaning, polishing, filtration and water jet cutting. A waterjet cutter produces a high-pressure jet of water with garnet and other abrasive grains in it. When the jet is aimed at a piece of metal, ceramic, or stone, it cuts the material producing very little dust. Garnet is starting to replace silica in abrasives, because silica is dangerous to workers health. Silica has been linked to a disease called silicosis.

More recently, lithium- oxide garnets have been receiving a lot of interest from researchers, because they can be used as electrolytes for batteries. Garnet crystals with a large number of lithium atoms in the crystal structure are called lithium-stuffed garnets, and these have been used in rechargeable battery technologies.

Garnet gemstones have been favoured by the rich and famous for many centuries. They have been found in many ancient Greek, Roman and Egyptian ruins . Red garnet necklaces were found in the tombs of Egyptian pharaohs, dating back to 3100 BCE and Ancient Romans were known to use carved garnets in signet rings to stamp wax seals, on important documents.

During the middle-ages (300 to 900 BCE), jewellers, in Scandinavia and Asia, used a technique called Cloisonné to decorate metal objects. The decorations consisted of compartments, with fine walls of silver or gold, filled with inlays of cut garnet and rhodolite gemstones, glass or other materials. The objects, known as cloisonnés were valued by royalty and those in power. In 2009 a large collection of metal artefacts decorated with gems, including garnets, was found on farmland in Staffordshire, England, by a man using a metal detector. The 3500 items, referred to as the Staffordshire hoard, were manufactured during the 6th and 7th centuries and included weapons, religious artefacts and jewellery.

In the 14th century, pyrope-garnet deposits were found in the area now known as the Czech Republic, and the gem cutting industry thrived there until the 19th century.

Garnets have featured in a range of folklore and legends. In the Talmudic version of Noah’s Ark, the ark was lit up by a massive red garnet and in the middle ages, garnets were sought after as a cure for depression. In northern Pakistan between 1889 and 1892, the Hunzas used garnet bullets to fight the British. They believed that garnets would be more effective bullets than lead because they were red, like blood.

Large garnets in a metamorphic rock from Ireland's Mine, Broken Hill, NSW. Some of the garnets are bigger than the tennis ball shown for scale. Source: Geoscience Australia

Different types of garnets occur in various geological environments throughout the world. Most garnet forms when a sedimentary rock with high aluminium content, such as shale, is metamorphosed (subjected to heat and pressure). The high heat and pressure breaks the chemical bonds in the rocks and cause minerals to recrystallise. The new minerals, that form, such as garnet, are more stable in those conditions. This process commonly occurs where two tectonic plates are converging. Garnets can also be found in igneous rocks such as granite and basalt.

As it is fairly resistant to abrasion and chemical weathering, garnet is often found in sedimentary rocks or material that is highly weathered and where only the hardest materials have been left behind, like mineral sand dunes.

Australia produces almost half of the world garnets, with the rest mainly coming from India, USA, and China. A large deposit of garnet sands was discovered at Port Gregory, Western Australia in the late 1970s. Subsequently, the largest garnet mine opened there in 1983 and it is currently the largest source of industrial garnet in Australia, and arguably the largest garnet producer in the world. The garnets at this deposit were transported to the site by streams and rivers from a nearby area of very old (Archaean) garnet-rich metamorphic rocks.

Garnets have also been extracted from Broken Hill in New South Wales (see Google Arts and Culture) and Harts Ranges in Northern Territory since the 1880s, as a by-product of mining other minerals from metamorphic rocks. The Thackaringa district near Broken Hill has extensive areas of garnet-bearing metamorphic rocks and mines have operated there intermittently since the 1960s. A garnet called almandine is common in these deposits. It is very important for industrial uses such as abrasives. In addition, yellow, orange and brown garnets have been mined since 2016 in the Harts Ranges near Alice Springs.

Other significant garnet deposits in Australia are associated with volcanic or metamorphic rocks in, Queensland, and New South Wales. In Queensland, Mount Garnet has deposits of red and green garnets. Gem-quality garnets are found near Proston, Mount Tarampa and Mount Wyangapinni, but these are essentially commercial fossicking localities, rather than mining operations. Garnets can also be found in the Bathurst to Orange district of new South Wales.

The Port Gregory garnet deposit is in mineralised sand dunes. These garnets are not large gem-quality crystals, but are used for industrial purposes. The mining operation is simple. The miners dig the garnet-rich sand out of the dunes with excavators and using trucks transport it to the processing plants, where the garnets are extracted and the waste sand returned to the mine. In early 2010 a deposit of garnet, was found in Harts Ranges, Northern Territory. There is an open-cut mining operation there now too.

Garnet can be separated from ore using either a wet or dry processing facility. The wet processing comprises adding liquid and spinning the garnet ore. This separates the garnet from the lighter impurities and any shells or sand. Then the mixture is subjected to upward flowing water to lift out any fine minerals. The garnet is then washed with clean water.

In the dry processing facility the garnet ore is fed through rotating dryers and exposed to magnetic separators that remove any existing impurities. The resulting pure garnet concentrate is then passed through a series of vibrating screens that grade the product into different sizes. Garnets are rarely treated because heat and radiation have little effect on the stone. They can be cut into many different shapes depending on the size of the rough crystal. The most popular cutting methods are: