Topaz gemstones come in a wide variety of colours. Common natural colours in Australia are clear, pale yellow and pale blue (see also Google Arts and Culture - Gems from the Safe). Some varieties of topaz have other common names:

Topaz is often associated with fluorite, cassiterite, and beryl. It is sometimes confused with quartz, although topaz is harder and forms different crystal shapes. Like ‘fools gold’, there are varieties of false topaz. Sometimes yellow quartz or citrine, is called topaz or topaz-quartz. Yellow corundum is called oriental topaz and yellowish-green andranite is called topazolite 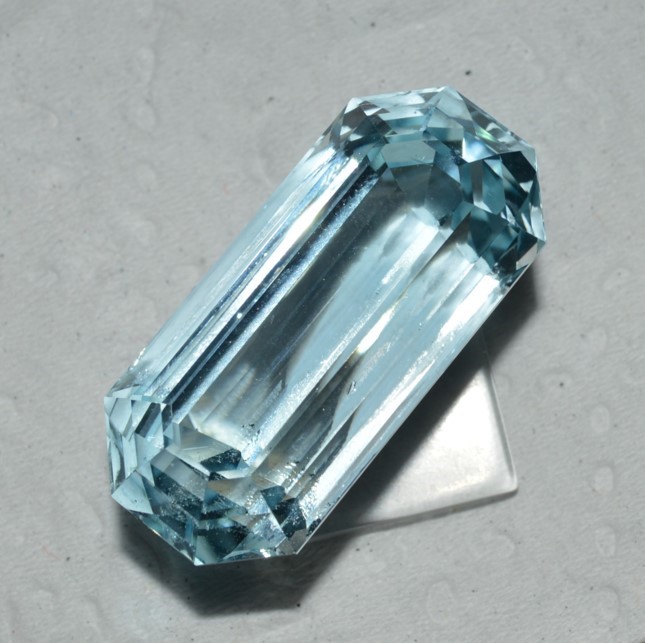 Topaz is a fluoro-silicate of aluminium, usually colourless, but can be white, yellow, light shades of grey, blue, orange, brown, green or pink. Unlike other gem stones, it is not always the impurities in the crystal that give topaz its colour. There are two dominant coloured centres in topaz crystals, produced by either a gap or an extra electron in the crystal structure. These anomalies can absorb certain parts of the light shining into the crystal, to produce either yellow or blue shades of colour. Green topaz has a mixture of yellow-and blue-type centres. When chromium replaces aluminium in the crystal structure of topaz, the crystal appears to be pink or red. A crystal with a chromium impurity and a yellow coloured centre would be an orange topaz.

Topaz crystals have perfect cleavage, which means that it tends to break along certain plains, perpendicular to the long axis of the crystal. For this reason, topaz is quite fragile, even though it has a hardness of 8, and is often found in sections, rather than whole crystals. Hardness is the resistance to being scratched, but the ability to resist breakage is called tenacity. Because topaz is so fragile, it is difficult to cut and set.

Some topaz crystals from Brazil are huge, as big as boulders and weighing kilograms. The American Golden Topaz is a famous gemstone. It now weighs 4.6 kg but was cut into 172 facets over two years from an 11.8 kg stone. The El Dorado Topaz, also from Brazil, was discovered in 1984. It weighed around 36 kg, but after being faceted into an emerald shape and polished, was reduced to 6.2 kg (still 31 000 carats). It is the largest faceted stone in the world.

Topaz is mainly produced for use as a gemstone for jewellery and ornaments.

Topaz can be a raw material for making refractory materials. These materials retain their strength at high temperatures, so can be used in furnaces, kilns, incinerators, and reactors. They are also used to make moulds for casting glass and metals. The steelmaking industry uses most of the refractory materials produced. Topaz can also be used as a raw material in the production of fluorine compounds, and in ceramic and glass manufacture.

The name topaz has been used for any yellowish gemstones for at least two thousand years. Gem traders did not know that these yellowish stones were actually different minerals until about two hundred years ago. Gem traders recognised that quartz, beryl, corundum and olivine all had yellow variants and were not true topaz and that topaz could be other colours not just yellow. In addition, the island Topazios, after which the gemstone has been named, never produced topaz, but was a source of peridot, or olivine often confused as topaz. The island is now called Zabargad Island.

Ancient Egyptians believed that yellow topaz received its golden colour from the Sun God, Ra. The ancient Greeks believed that topaz gave them strength and topaz is mentioned in the modern translation of the bible, although the word probably referred to a yellow stone, not necessarily true topaz.

During the middle ages, the main source of topaz was from a deposit in the Erzgebirge Mountains in Germany. Hundreds of kilograms of yellow to brown topaz crystals were mined from the deposit. Then in the 1730s, a large topaz deposit was discovered in the Minas Gerais region of Brazil. During this period, Brazil was a colony of Portugal, so in 1768, the Portugese Government officially recognised the deposit as an important commercial mine, and most of the gems were transported back to Europe. Brazil remains the largest producer of Topaz in the world.

Gem quality topaz was first found in Australia as a by-product of metal mining operations. In 1872, tin was discovered in the New England area of New South Wales and mining commenced shortly afterwards. When the miners concentrated the alluvial material, sometimes they found pebbles of topaz. Waterworn topaz was found associated with gold, tin and wolfram deposits throughout eastern Australia. Topaz contains the element fluorine, which only occurs in high concentration in a few geologic environments. Topaz usually forms along fractures and in cavities of igneous rocks like rhyolite, granite or pegmatite. The crystals grow in the late stages of a magma cooling, when there is enough fluorine to enable the formation of topaz. Some topaz crystals grow after hot fluids (hydrothermal solutions), rich in fluorine, flow through cracks in rocks that have already cooled. Topaz can also form in metamorphic zones.

In Australia, topaz is found in stream gravels (placer deposits) derived from granites. Typically it is found as rounded or angular lumps but it also is found in coarse-grained granites, metamorphic and sedimentary rocks. Most Australian topaz is found in alluvial placer deposits. Gem-quality topaz is found in the gem fields of the Torrington, Oban and Mitchell Rivers in the New England area of New South Wales as well as Lightning Ridge. In Queensland, the largest deposits occur near Mount Surprise and Mount Garnet and there are deposits near Beechworth, Victoria, Coolgardie and Menzies region of Western Australia and Flinders Island in Tasmania. The topaz from Flinders Island is known locally as Killiecrankie Diamond.

Primary topaz is also found in metamorphic rocks at Broken Hill, and granite at Ardlethan in New South Wales. Deposits of topaz suitable for industrial uses, (as refractory materials) occur in quartz-rich rocks (silexite) at Torrington and Gumble.

In the largest topaz mines, such as those in Brazil, surface mining (mostly open pit) and underground mining methods are used to extract the gems from the ground. Bulldozers, drag scrapers or water cannons are used to remove the unwanted material over the deposit. The ore is transported from the open pits using excavators and trucks, or large buckets. It is taken to hydraulic washing stations where fine material like clays are cleaned from the topaz crystals and other minerals are recovered using sorting belts.

Most of the topaz in Australia is associated with alluvial gravels and small-scale mining operations or prospecting. Dry Sieving is the method used most frequently to separate the gems from the other gravels. A shovel is used to fill a shaker box with gravel from the deposit. Movement of the box separates out the gravels and dust. Then topaz is hand-picked from the remaining larger pebbles. At Killiecrankie Bay on the northern end of Flinders Island, topaz crystals can be found by digging and sieving the beach sediments from below the high water mark. 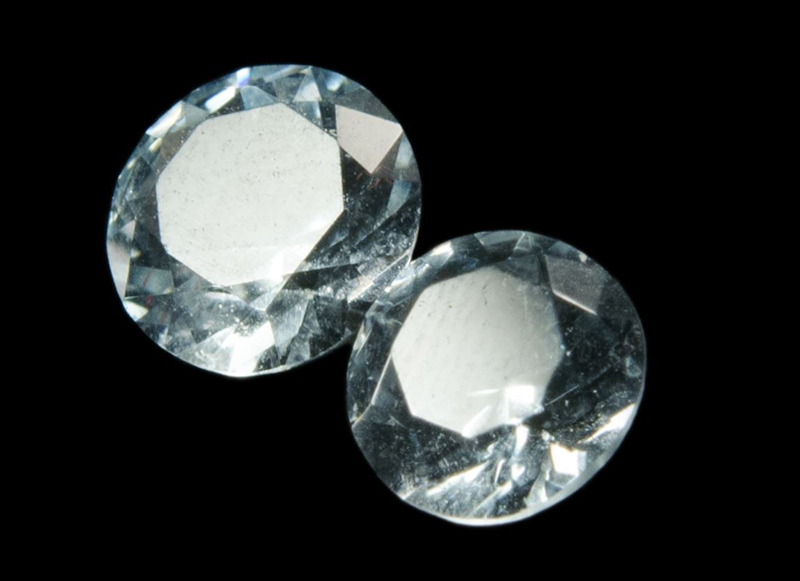 Once the topaz has been mined, it may be treated, polished with diamond or aluminium oxide, or cut. Many topaz crystals are treated to enhance their colours with heat, radiation, or metallic coatings. There are small gaps in the crystal structure of many topaz crystals, caused by natural radiation. These gaps alter the way light moves through the crystal, making the crystal appear blue. Almost all of the blue topaz sold today has been irradiated and then heated to produce a blue colour, because natural deep blue topaz is rare.

Natural pink and purple coloured gems are also extremely rare, but these colours can also be produced by heating and then coating a topaz crystal with a layer of metallic oxide. Some topaz is coated with a metallic oxide that gives the stone a multi-coloured iridescent sheen. Green topaz is produced by exposing a white topaz crystal to chemicals, a process called diffusion treatment.

Topaz of all colours is used in jewellery, but the blue, orange, and pink coloured stones are usually cut as gemstones. Colourless topaz is becoming increasingly popular as an inexpensive diamond substitute. Very large gems and faceted spheres are cut from the larger crystals but topaz is rarely cut into cabochons.