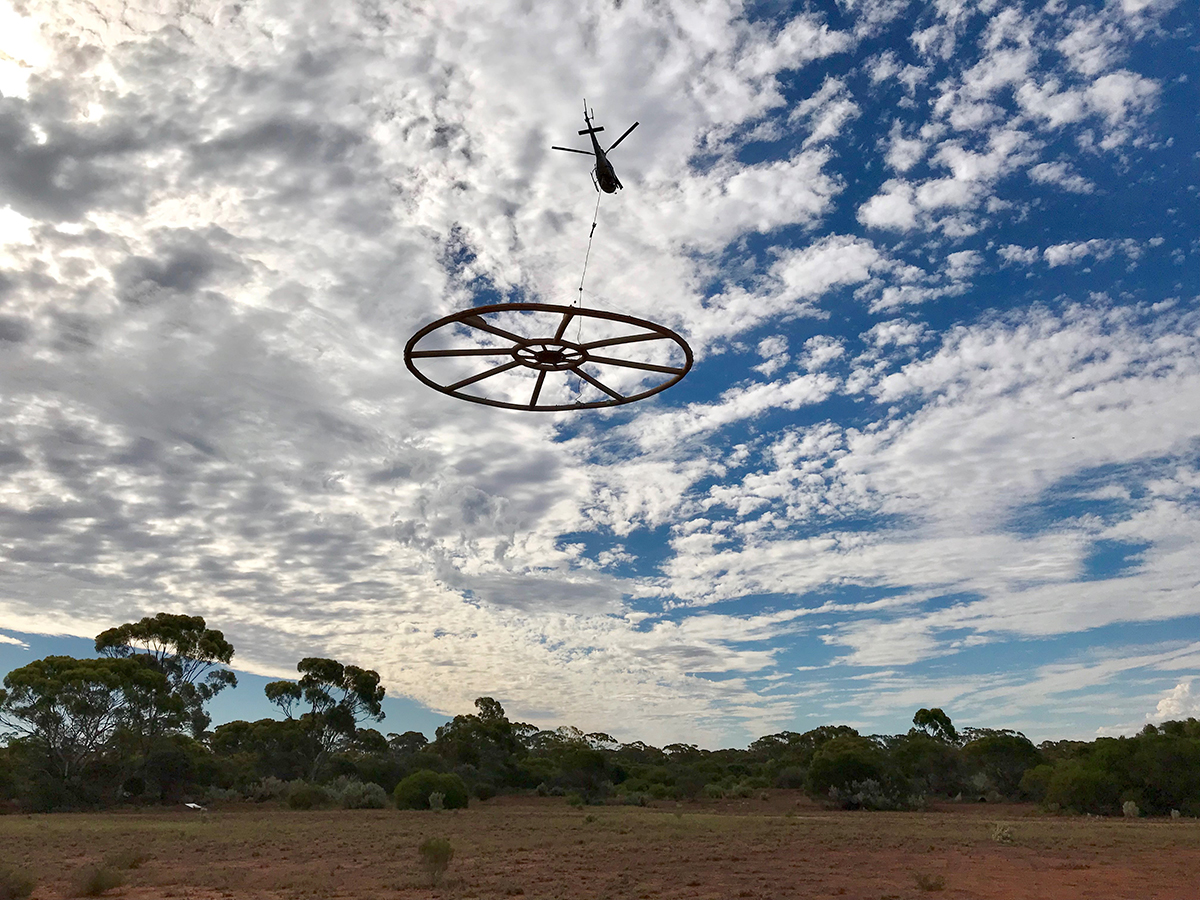 Airborne Electromagnetic (AEM) data are used in minerals, energy, and groundwater resource exploration. The AEM technique takes advantage of natural variations in electrical conductivity beneath the surface, which results from variation in rock and pore fluid properties. The presence of electrically conductive minerals such as graphite, clays, and sulfide minerals, or electrically conductive fluid such as saline groundwater, results in greater conductivity relative to non-conductive mineral assemblages, or non-conductive fluid (typically fresh ground water). Due to the influence of both rock and pore water properties on the AEM response, AEM datasets are normally interpreted in conjunction with down-well datasets relevant to conductivity, and other spatial and airborne datasets including surface geology and magnetics and gravity.

AEM data are collected by transmitting an electromagnetic signal from a system attached to a plane or helicopter. The signal induces eddy currents in the ground which are detected by receiver coils towed below and behind the aircraft. AEM techniques can detect variations in the conductivity of the ground to a depth of several hundred metres, depending on the acquisition system and geological and hydrogeological stratigraphy. AEM surveys require complex processing to allow interpretation and, therefore, are usually designed to detect particular subsurface targets which are based on a perceived conductivity contrast, for example:

AEM surveys are more expensive to acquire than other airborne geophysical methods like magnetic and radiometrics. Consequently, government organisations, the minerals industry and groundwater researchers have historically acquired AEM data in only relatively small and isolated locations at narrow line spacing (~ 200 metres) for specific purposes across Australia.

Geoscience Australia first acquired large area, broad line spacing AEM surveys for minerals and energy purposes as part of Geoscience Australia's Onshore Energy Security Program (OESP). These surveys were designed to reveal new information about regions that are considered prospective for energy and mineral resources. Mineral exploration companies have benefitted through an improved understanding of the regional geology and having the opportunity to collaborate by paying for more detailed data acquisition over a specific area of interest. Since the completion of the OESP in 2011, Geoscience Australia's State and Territory partners have commenced their own broad line-spacing, large-area AEM surveys, managed by Geoscience Australia. The AusAEM surveys at 20 km line spacing (currently comprising AusAEM 1, AusAEM 2, and AusAEM 20) started in 2017 represent the most extensive AEM acquisition program ever conducted.

Geoscience Australia undertakes AEM surveys to inform on aquifer distribution and groundwater quality for characterisation of our regional groundwater systems. The AEM data are processed and modelled to estimate the bulk conductivity of the subsurface. The conductivity models are integrated with other hydrogeological datasets, to infer the groundwater and aquifer properties.

Geoscience Australia also conducts ongoing research into the suitability of AEM systems for groundwater characterisation in different geological terrains, and development of new processing techniques which are allowing unprecedented characterisation of the uncertainty associated with conductivity estimates through the depth profile. The results are used to understand regional groundwater systems including 3D modelling of aquifers, modelling groundwater salinity and modelling aquifer properties. These interpreted products can inform the identification of fresh water aquifers that may be suitable for abstraction or managed aquifer recharge and for assessing hazards such as salinity or sea water incursion. Recent major AEM surveys that Geoscience Australia has conducted include the Broken Hill Managed Aquifer Recharge Project, and surveys under the Exploring for the future (EFTF) program including the East Kimberly project, the Northern Stuart Corridor, Southern Stuart corridor, and Surat and Galilee basins.

There are more than 14 different AEM systems currently operating in Australia, including time domain (TEM) and frequency domain (FEM) methods. The accuracy, integrity and usability of AEM data are reliant on many factors including topography, system geometry (the positions of emitter and receiver coils), noise and geographical location. AEM data funded by Commonwealth, State and Territory government agencies should be fit-for-purpose as well as fit for re-use in the future.

To fulfil the requirements of making AEM data fit-for-purpose and suitable for modelling, interpretation and archiving, a range of data and interpretation products are made available by Geoscience Australia, including:

The transformation of AEM data to conductivity depth sections is used to assess the AEM data for consistency and to ensure it is consistent with plausible geological models in the survey area. Geoscience Australia uses forward modelling and inversions to check that data can be quantitatively fitted to within estimated noise levels. Geoscience Australia uses the Geoscience Australia-Layered Earth Inversion (GA-LEI) code for most AEM inversion products (Brodie and Fisher, 2008; Brodie and Sambridge, 2009) for these purposes. The inversion of AEM data is an active area of research, with the use of probabilistic Bayesian inversion code to quantify the degree of uncertainty in conductivity-depth profiles and identify the most suitable deterministic inversion being a recent development (Ray et al., 2020).