Iron (Fe) is a metallic element that constitutes 5.6% by weight of the Earth's crust and is the fourth most abundant element in the crust. Iron ores are rocks from which metallic iron can be economically extracted. The principal iron ores contain hematite (Fe2O3) and magnetite (Fe3O4).

Hematite is an iron oxide mineral. It is non-magnetic and has colour variations ranging from steel silver to reddish brown. Pure hematite contains 69.9% Fe by molecular weight. It has been the dominant iron ore mined in Australia since the early 1960s. Approximately 96% of Australia's iron ore exports are high-grade hematite, the bulk of which has been mined from deposits in the Hamersley province of Western Australia. The Brockman Iron Formation in this province is the most significant host for high-grade hematite iron ore deposits.

Magnetite is an iron oxide mineral that is generally black and highly magnetic. The latter property aids in the beneficiation of magnetite ores. Magnetite contains 72.4% Fe by molecular weight, which is higher than hematite, but magnetite ores having lower ore grade (generally 20-30% Fe) owing to the presence of impurities. This results in higher costs for the production of concentrate for steel smelters.

In 2018, Sino Iron produced and shipped more than 19 million wet metric tonnes of magnetite concentrate to the company's steel plants and Asian steel mill customers. Project owner Citic Ltd has stated that improvements in its processing lines, have resulted in lower production costs1.

The Karara project has reported production of 7.8 million dry metric tonnes (dmt) of magnetite concentrate for the 2017-18 financial year, at an average product quality of approximately 65.6% Fe, a decrease of 2.5% from 8 million dmt the previous year2.

Also, despite disruptive rainfall during 2018, the Savage River operation successfully delivered 2.37 million tonnes (Mt) of magnetite pellets, a 25% increase from the previous year3.

High-grade hematite ore is referred to as direct shipping ore (DSO) as, once mined, the ore goes through a simple crushing and screening process before being exported for steel-making. Australia's hematite DSO from the Hamersley province averages from 56% to 62% Fe.

Like hematite ores, magnetite ores require initial crushing and screening but also undergo a second stage of processing using the magnetic properties of the ore to produce a concentrate. Further processing of magnetite involves agglomeration4 and thermal treatment of the concentrate to produce pellets. These can be used directly in blast furnaces or in direct reduction steel-making plants. The pellets contain 65% to 70% Fe, a higher grade compared to the hematite DSO currently being exported from the Hamersley province. Additionally, when compared to hematite DSO, the magnetite pellets contain lower levels of impurities, such as phosphorous, sulphur and aluminium. Thus, magnetite pellets are a premium product and attract higher prices from steel makers. This offsets the lower ore grades and higher costs of production.

Australia's iron ore reserves and resources comprise both hematite and magnetite. Owing to the high average grades (% Fe) of hematite ores when compared to average beneficiated grades of magnetite ores, it is necessary to report national inventory in terms of contained iron as well as bulk iron ore. The national estimates for iron ore since 2010 are reported in two categories, namely:

Total Australian Ore Reserves of iron ore reported in compliance with the JORC Code were estimated to be 23 106 Mt in 2018 (Table 1), representing 47% of Economic Demonstrated Resources (EDR; Table 3).

Ore Reserves of contained iron reported in compliance with the JORC Code totalled 10 540 Mt in 2018 (Table 1), or 44% of the EDR of contained iron (Table 4). However, not all mining companies are publicly listed; as such, unreported reserves and resources are not included in these figures.

Based on publicly available data, JORC Reserves at operating mines are sufficient for approximately 13 years at the 2018 rate of mine production (Table 2). This increases to 26 years if all deposits with reserves are considered (Table 1). The addition of unreported quantities would, again, increase these estimates. Interestingly, the potential reserve life of contained iron is only 19 years (Table 1), due to preferential depletion of deposits with higher iron content.

Most operating mines reported a decrease in Ore Reserves in 2018, largely due to mining depletion and changes to the mining area. Operations that reported an increase in their Ore Reserves include: Fortescue Metal Group (FMG)'s Kings and Queens, which reported a 3% increase5; Hamersley Iron Pty Ltd's Marandoo operation, with a 17% increase6; and BHP Ltd's 'Marra Mamba' Ore Reserves increase due to the inclusion of the South Flank Project7.

Table 2. Ore Reserves and Mineral Resources of iron ore at operating mines in 2018.

In 2018, Australia's EDR of iron ore increased by 3% from 2017 to 49 604 Mt (Table 3). Similarly, there was a 4% EDR increase of contained iron to 24 122 Mt (Table 4). EDR attributable to magnetite deposits have decreased by 1%, likely due to re-assessment of projects and inactivity in the magnetite industry. The vast majority (92%) of Australia's EDR of iron ore occurs in Western Australia with relatively minor occurrences in South Australia, New South Wales and Tasmania (Figure 1).

Figure 1. Distribution of iron ore EDR by Australian jurisdiction as at December 2018. Where applicable, the number of mines in each jurisdiction is in brackets.

The market price for seaborne iron ore has risen consecutively over recent years from a low of US$47/t in 2015-16 to US$72/t in 2018‑19. This is partly due to market concerns of a supply shortfall from Vale S.A.'s operations due to infrastructure failures in Brazil. In Australia, iron ore shipments were disrupted by unfavourable weather conditions in the Pilbara region of Western Australia. Another factor is short-term demand from Chinese steel mill producers, with increased production prior to a government-imposed winter production slowdown.

In response to this economic environment, some companies are re-visiting suspended resource projects that have defined resources and economic potential. New projects are required for established producers to maintain current production output and meet target capacity rates as existing projects are depleted. For instance, the US$2.9 billion South Flank Project was announced by BHP in June 2018 to replace the 80 Mt per annum (Mtpa) production at the depleting Yandi mine8.

The US$1.275 billion Eliwana Project announced by FMG will ensure it maintains its minimum production rate of 170 Mtpa9. New mine developments include Rio Tinto Ltd's Koodaideri Project. The projected capacity rate of Koodaideri is around 43 Mtpa, with expected production in the latter part of 202110. The previously halted Koolan Island mine (Mount Gibson Iron Ltd) has also re-started, with the first ore sale reported in early 2018. Koolan Island's main pit is expected to be mined over the next five years with an estimated JORC Ore Reserve of 21 Mt at an average grade of 65.5% Fe11. 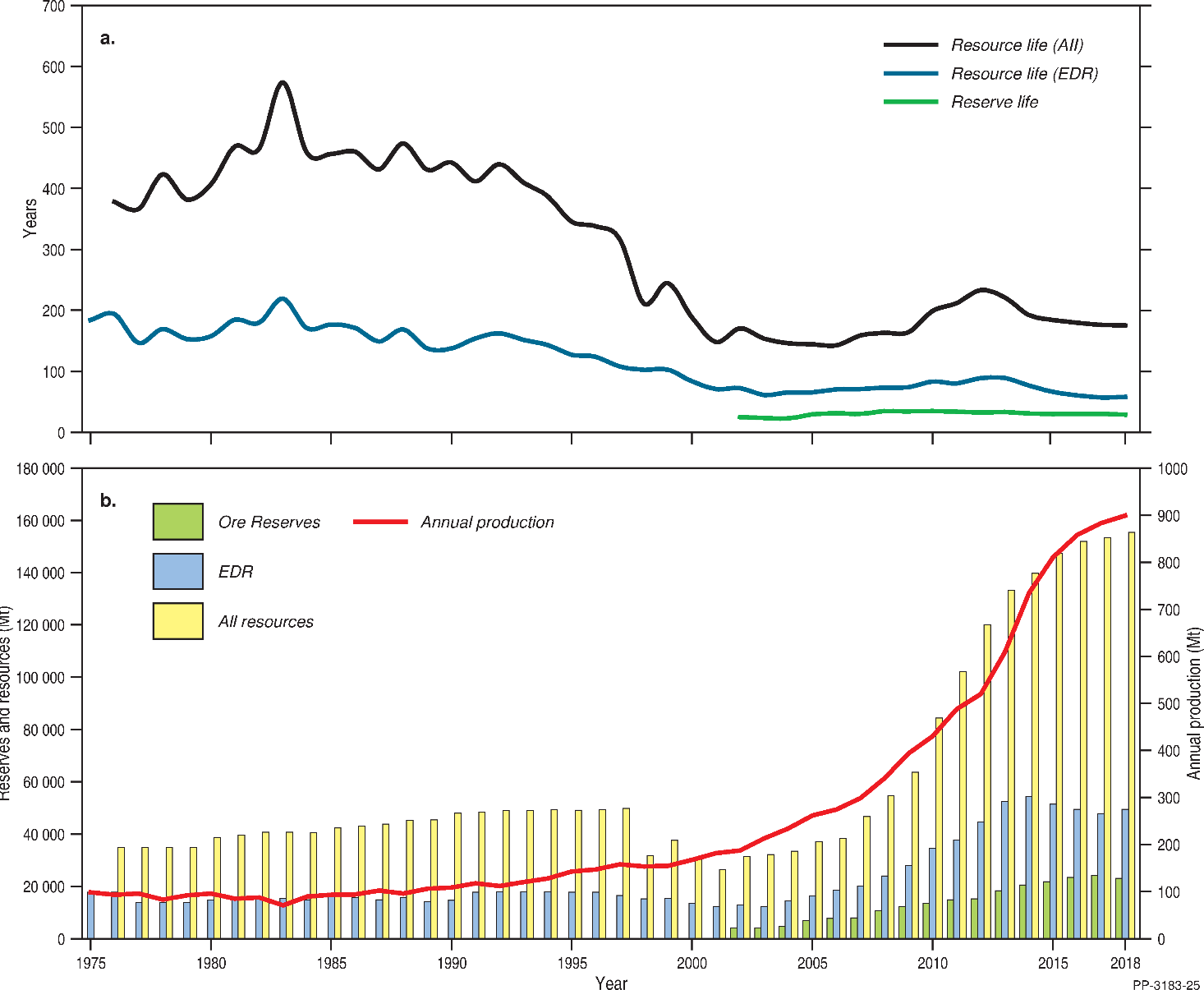 Some mineral resources are inaccessible for mining because of environmental restrictions, government policies or because they occur within military lands or national parks. Australia's accessible EDR (AEDR) of iron ore also totals 49 604 Mt (Table 3) as all of Australia's EDR iron ore deposits are regarded as accessible. Therefore, both AEDR and EDR have increased by 3% during the 2018 assessment period.

Australia's total production of iron ore for 2018 was 899 Mt (Table 3), with Western Australia producing 891 Mt or 99% of overall production. South Australia and Tasmania produced the remaining 1% of iron ore in 2018 with 6 Mt and 3 Mt, respectively.

Rio Tinto Ltd reported 2% production growth at its Pilbara mines with output of 337.8 Mt in 201812. This increase was attributed to productivity improvements and expanded mine output. BHP reported total production of 275 Mt from its Western Australian operations for the 2018 financial year13, an increase of 3% from the previous year.

The Office of the Chief Economist projects that iron ore exports will continue to increase, reaching 996 Mt in 2024-25 15. This increase will be supported by new and expansion projects, including the Koodaideri, South Flank and Eliwana projects.

Australia is the world's largest iron ore producer but its iron ore resources are also the largest in the world; thus the potential resource life of Australia's iron ore deposits is considerable (Table 5). It is important to stress that the reserve and resource lives discussed here apply to Australia as a whole. The length of production at individual mines is dependent upon the amount of remaining resources and the discovery of additional near-mine resources. Moreover, mine life can be extended or renewed through the development of new technologies, including mine waste retreatment.

Overall reserve and resource lives for Australia may also increase as new mines are developed and become producers, either replacing existing production as old mines close or introducing new production. This is illustrated by Table 5, which compares reserve and resource lives for only operating mines with those for all deposits. As an example, when all deposits of iron ore are considered, the life of all resources, at 175 years, is far longer than the all resources life of 73 years calculated for operating iron ore mines. Similarly, the reserve life of all deposits is twice that of operating mines alone.

Mt = million tonnes.
Reserve and resource life for each mineral commodity is calculated by dividing the inventory by production. The resulting ratio is a snapshot in time that can only be used for general impressions because it is an average and it assumes (1) that production rates in the future will remain the same as those used in the calculation, (2) deposits deemed economic/uneconomic remain so in the future and (3) that depleted resources are never replaced.

Hematite ore is sourced mainly from Australia and Brazil and dominates world production. Australia produced 36% (899 Mt) of world iron ore production, followed by Brazil with 20% (490 Mt) and China with 14% (340 Mt; Table 7). Magnetite ore has established a presence in world production and contributes to Australia's EDR of iron ore, largely from established operations such as Savage River in Tasmania, Sino Iron in the Pilbara and from other magnetite resource deposits in Western Australia and South Australia. These represent 37% of Australia's total EDR of iron ore.

Despite Western Australia dominating the iron ore industry in Australia, deposits occur in each Australian state as well as the Northern Territory (Figure 3). This section highlights recent company exploration and development-related activities.

The seaborne iron ore price has improved over recent years and, while still volatile, is enough to bring some positive momentum to the industry. Except for large and established operations, industry activity during the 2018 assessment period was largely upgrades to resource estimations to comply with JORC (2012) requirements. All reported reserves and resources are compliant with the JORC Code unless otherwise stated. 4 Agglomeration is the process in which magnetite grains are aggregated into pellets using a chemical binding reagent. Pellets are produced in a pelletising plant.

31 Davis Tube Recovery testing is a laboratory technique that firstly pulverises the magnetite sample and then uses a Davis Tube wash to recover the magnetic particles. It measures the proportion of the sample that is magnetic and therefore the likely grade of magnetite concentrate at a given grind size. The recovered magnetic and non-magnetic portions can be further analysed for chemical composition.