Although these elements are referred to as rare they are not particularly rare in the earth’s crust. Cerium is the 25th most abundant crustal element and lutetium, the scarcest REE, is about the 60th most abundant. However, it is not common for them to occur in concentrations sufficient to support commercial mining operations. Resources of REE are mainly associated with four geological environments: alkaline igneous rocks, carbonatites, placer deposits with monazite-xenotime mineralisation and ion-adsorption clay deposits. Australian REE resources occur in a range of geological environments, which are comprehensively reviewed in Hoatson et.al.2.

Rapid technological advances have resulted in the REE growing in importance in many domestic, medical, industrial and strategic applications because of their unique catalytic, metallurgical, nuclear, electrical, magnetic and luminescent properties. Examples of the many applications for REE are their use in magnets and super magnets, motors, metal alloys, electronic and computing equipment, batteries, catalytic converters, petroleum refining, medical imaging, colouring agents in glass and ceramics, phosphors, lasers and special glass.

Many REE have numerous applications while particular applications may use different REE depending on the properties required; e.g., neodymium and praseodymium are used in high-power magnets; dysprosium, samarium, and terbium in high-temperature magnets and holmium is used in very-high-power magnets. Some REE may also be used in specialised applications, e.g., europium in currency security and gadolinium in MRI imaging.

The non-lanthanide REE, scandium and yttrium, have a number of important applications in modern technology. The major use of scandium is in the production of alloys for use in the aerospace industry. In addition, it may be used in solid oxide fuel cells, in specialised lighting applications, ceramics, lasers, electronics, and alloyed with aluminium for sporting goods production. Yttrium has a range of applications including ceramics, phosphors and metallurgy. In ceramic applications yttrium compounds are used in abrasives, bearings and seals. It is also used in wear- and corrosion-resistant cutting tools and has applications in high-temperature superconductors and metal alloys.

The growing strategic importance of REE and scandium was reflected in their inclusion in the US Government’s 2018 list of 35 critical minerals. This list was an initial step toward ensuring reliable and secure supplies of minerals critical to the US economy and military3.

When reporting on REE, companies may, at times, use a broad subdivision of the group into Light Rare Earth Elements (LREE), Heavy Rare Earth Elements (HREE) and, occasionally, Medium Rare Earth Elements (MREE). These are not formal groupings and are not applied consistently across the industry. In Australia, companies use these groupings from time to time and usually provide information on which elements are included in each. It should also be noted that companies usually report REE content as rare earth oxides (REO) and yttrium oxide (Y2O3). Geoscience Australia also reports the rare earths inventory as REO+Y2O3. Conversion factors must be applied to each individual REO to determine REE metal content.

Mt oxide = million tonnes of rare earth oxide plus yttrium oxide.
No reserves were reported prior to 2010.

Table 2. Ore Reserves and Mineral Resources of REO+Y2O3 reported in compliance with the JORC Code at operating mines in 2018.

*Reserve and resource life for each mineral commodity is calculated by dividing the inventory by production. The resulting ratio is a snapshot in time that can only be used for general impressions because it is an average and it assumes (1) that production rates in the future will remain the same as those used in the calculation, (2) deposits deemed economic/uneconomic remain so in the future and (3) that depleted resources are never replaced.

Some mineral resources are inaccessible for mining because of environmental restrictions, government policies or because they occur within military lands or national parks. All of Australia’s EDR of rare earths are considered to be accessible (Table 3).

Exploration expenditure data for rare earths are not reported by the Australian Bureau of Statistics.

Australian production of rare earths in 2018 was almost 0.019 Mt (Table 1, Table 2, Table 3). It came predominantly from Lynas Corporation’s Mount Weld mine in Western Australia with output in 2018 reported as 18 556 t of REO. Concentrates from Mount Weld are processed at the Lynas Advanced Materials Plant in Malaysia to produce REO products. In addition, 2.6 t of rare earth carbonate was produced and exported to China by Northern Minerals Ltd from its pilot mining and processing operation at the Browns Range project in the Kimberley region of Western Australia.

According to estimates published by the United States Geological Survey (USGS) and modified by Geoscience Australia for Australian resources, world economic resources of rare earths in 2018 totalled 120 000 kt of REO (Table 4). Detailed global data are not available for yttrium but the USGS have reported that world economic resources of Y2O3 are estimated to be more than 500 kt4.

World production of rare earths, based on USGS data and modified for Australian production, was estimated to be 170 000 t of REO in 2018 (Table 5). Australia was the world’s second-largest producer due to output from Lynas Corporation’s Mount Weld mine in Western Australia. Trial mining and processing at Northern Minerals Ltd’s Browns Range project, also in Western Australia, contributed a small quantity to Australia’s output. Detailed data for world production of yttrium are not available. The USGS comments that world production of Y2O3 was almost entirely from China and was estimated at between 5000 and 7000 t 6.

Current interest in REE is shown by the range of projects located in the Northern Territory and most Australian states (Figure 1). This section highlights recent company exploration and development-related activities. Companies use a range of units to report tonnage and grade and these have generally not been converted from the original source material. All reported reserves and resources are compliant with the JORC Code unless otherwise stated. 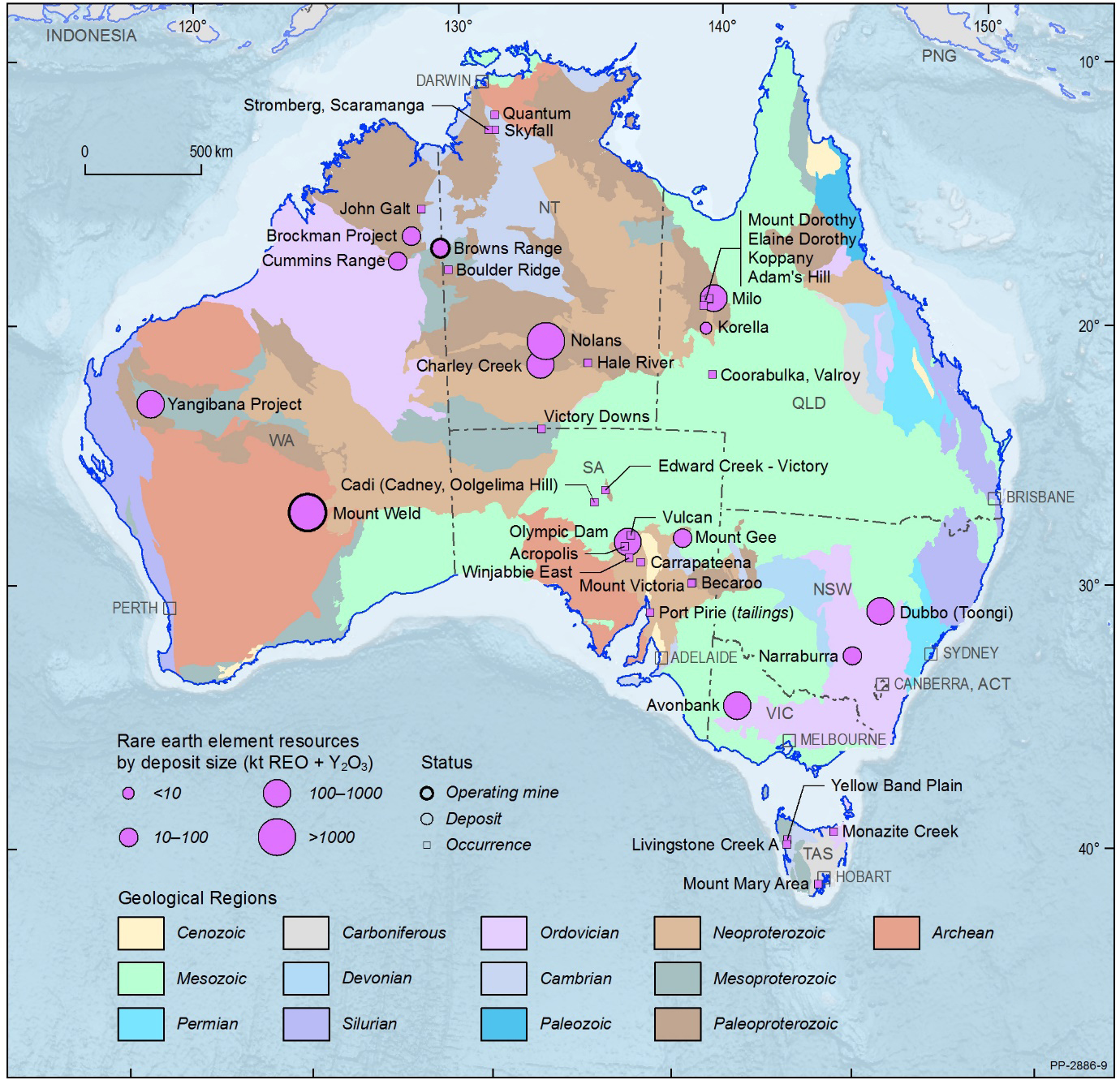 Rare earths-bearing minerals monazite and xenotime occur in many of Australia’s heavy mineral sand deposits and, up until the mid-1990s, monazite was produced from them and exported, mainly to Europe. A brief overview of these activities is given by Hoatson et.al (2011)138.

Following environmental issues in France relating to the disposal of toxic and radioactive waste generated in the processing of monazite, the French plant was closed. A second major obstacle to continued processing of monazite was the high cost of disposing of thorium produced during the process. France’s monazite imports stopped immediately causing Australian mine production to cease. Subsequently, monazite generated by heavy mineral sand mining was returned to the mine.

In recent developments, some companies are planning to restart Australian REE production from mineral sands deposits. Iluka Resources Ltd began a prefeasibility study in 2018 on the Wim 100 deposit near Horsham in Victoria. Also near Horsham, WIM Resources Pty Ltd announced its intention to produce an REE concentrate in conjunction with heavy mineral sand products from its Avonbank project in Victoria (see page 16).