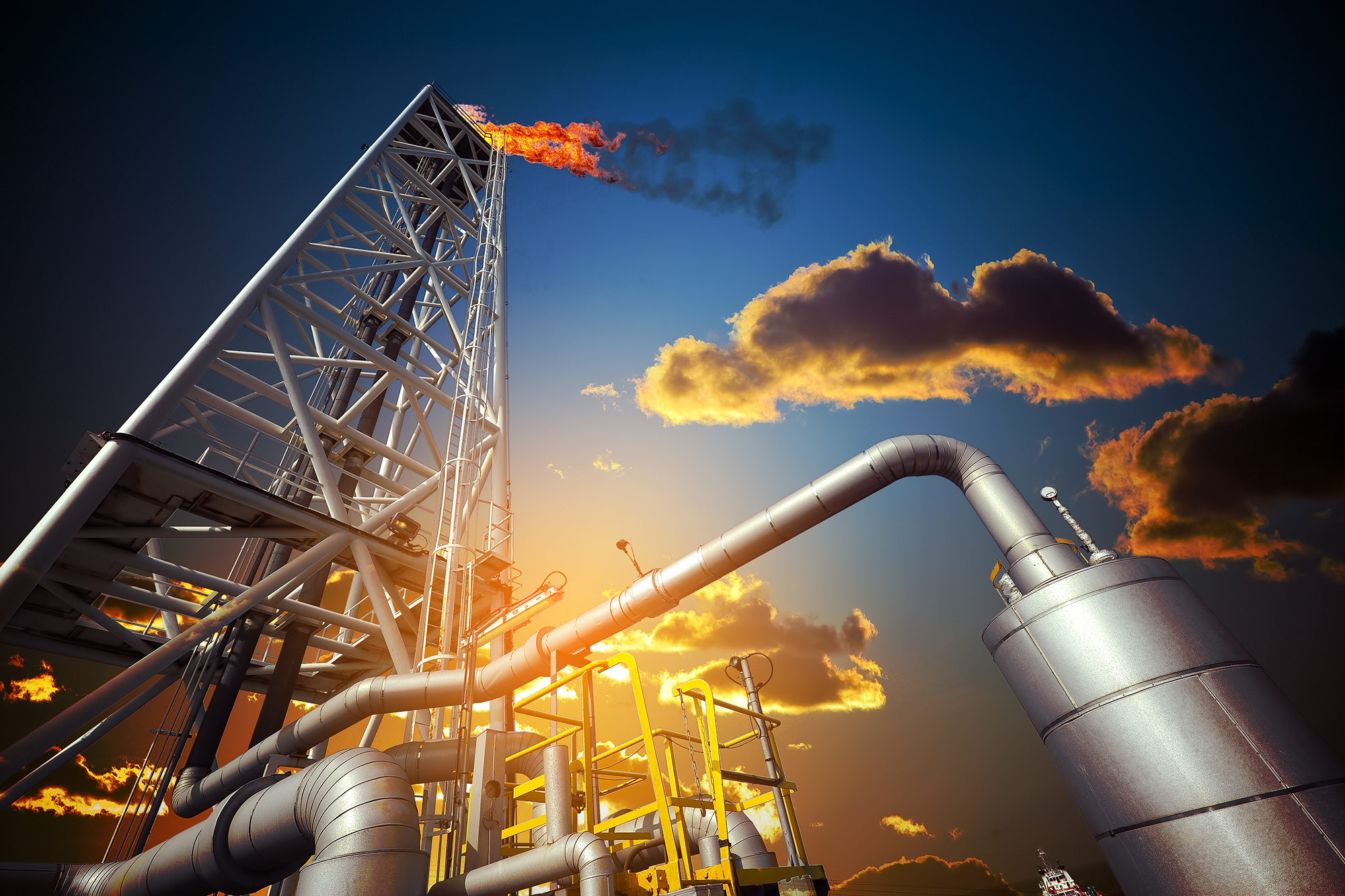 Gas resources are reported as best estimate of reserves (2P) and best estimate of contingent resources (2C) using the SPE-Petroleum Resources Management System. Reserves are commercially recoverable amounts of petroleum that remain in known accumulations, of which 2P reserves are the best estimate (the sum of Proved plus Probable Reserves). Australia’s 2P reserves in 2019 are estimated as 74,992 petajoules (PJ; 66.69 Tcf) for conventional gas and 31,597 PJ (29.79 Tcf) for unconventional CSG (Table 1 and Table 2; Figure 1 and Figure 2). At 2019 annual gas production rates of 6,245 PJ, this is the equivalent of 17 years of production for all gas reserves.

Gas production overall has increased substantially, primarily driven by a rapid expansion of the Australian LNG industry on both the west and east coasts. These gas projects feed into both the domestic market and the international export market. About 74 per cent of natural gas production was exported in 2018‑19. Australia and Qatar are currently the world’s largest exporters of LNG. 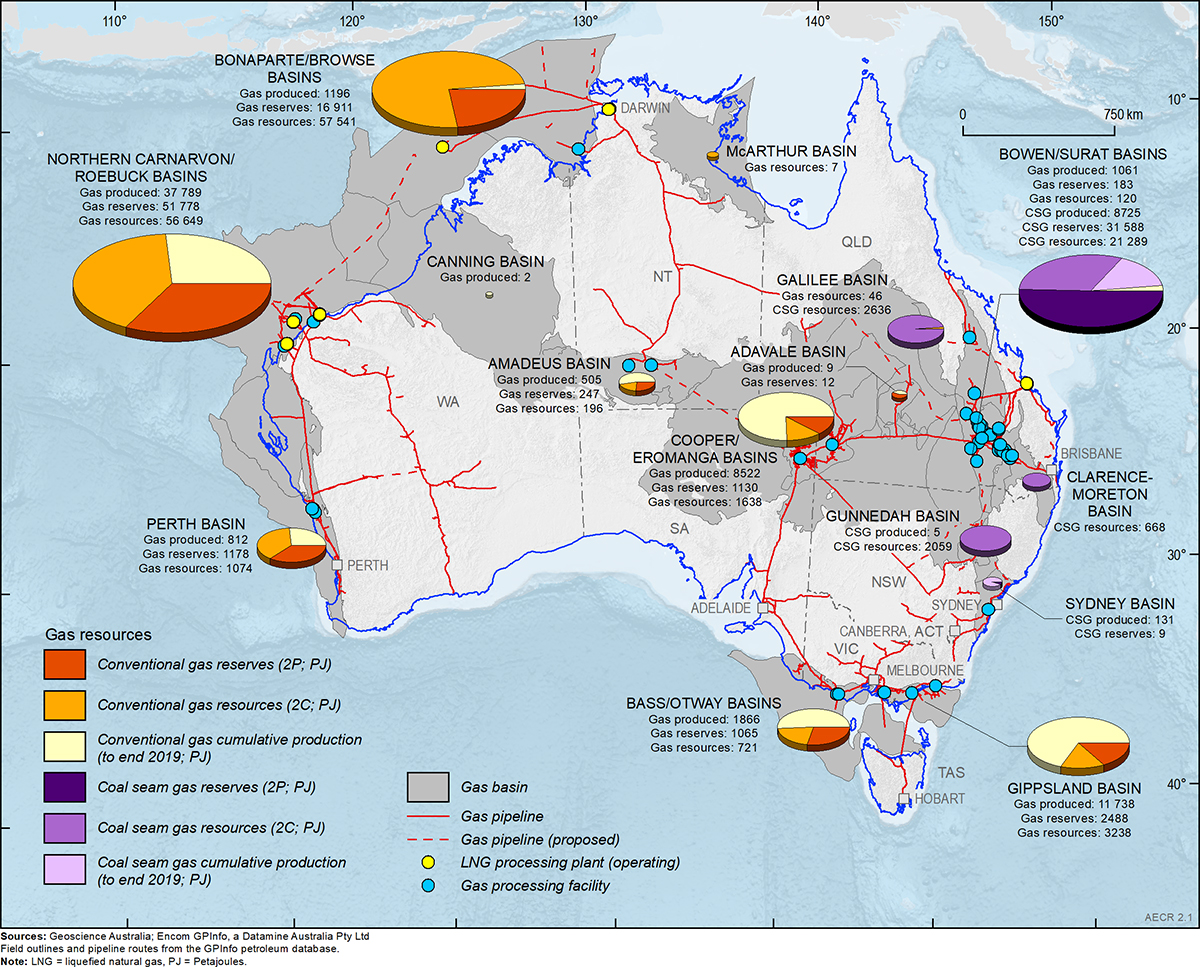 Identified resources are those that have been discovered and their locations, quantity and quality are known from measurements or direct geological evidence. Identified gas resources, for the purposes of this report, are the equivalent of discovered 2P reserves and 2C contingent resources in the SPE-Petroleum Resources Management System.

The 2019 resource estimates compiled for this report are based on publicly available onshore data aggregated with confidential offshore data submitted to the National Offshore Petroleum Titles Administrator (NOPTA). Offshore data are reported for calendar year 2019, while onshore data are based on government statistics and company estimates reported at various dates between June 2019 and June 2020. The data are aggregated for composite basin regions where necessary to de-identify confidential offshore field data in the custody of NOPTA.

Coal seam gas is expected to remain as Australia’s most important unconventional gas resource in the near term (Figure 1 and Figure 2). CSG is already a major source for domestic gas and LNG exports in eastern Australia. Almost all reported CSG reserves and contingent resources are located in Queensland; the remainder are in New South Wales. In 2019 Australia’s total 2P reserves are estimated as 31,597 PJ (29.79 Tcf), accounting for 30 per cent of the total remaining 2P gas reserves. An additional 26,652 PJ (23.70 Tcf) of 2C contingent CSG resources are estimated in 2019. Aggregating Australia’s 2P reserves and 2C contingent resources provides a total estimate of 58,248 PJ (53.49 Tcf) of CSG identified resources. Based on 2019 production rates of 1,603 PJ (1.43 Tcf), these identified CSG resources would have an estimated life of 36 years if all identified contingencies to development are mitigated.

Unconventional contingent gas reserves for Australia, other than coal seam gas, are reported from an in-situ coal gasification demonstration plant at Leigh Creek in South Australia. The total 2P reported reserves of syngas for the Leigh Creek Energy Project in the Telford Basin are 1,153 PJ (1.03 Tcf) (Table 3).

Currently, there are no published reserves data for shale, tight or basin centred gas. This reflects the very early stage of unconventional gas exploration, a lack of infrastructure, and low oil and gas prices. Santos initially reported 3 PJ (2.8 Bcf) of shale gas reserves from the Moomba gas field in the Cooper Basin in 2012 (Santos, 2012, 2013), but these were subsequently downgraded to contingent resources.

Unconventional 2C contingent gas resources for Australia, other than coal seam gas, totalled 13,672 PJ (12.49 Tcf) during 2019 (Table 3). More than half of these (7,423 PJ; 6.60 Tcf) are represented by shale gas resources in the Beetaloo Sub-basin of the greater McArthur Basin, which are being appraised through drilling campaigns by Origin Energy, Empire Energy and Santos. Significant unconventional 2C contingent gas resources have also been identified in the Cooper Basin (2,080 PJ; 2.18 Tcf), Canning Basin (2,438 PJ; 2.17 Tcf) and Telford Basin (1,469 PJ; 1.31 Tcf) (Table 3).

Resources that are yet to be discovered can still be assessed and classified using the SPE-Petroleum Resources Management System. Undiscovered petroleum accumulations have a chance of geologic discovery and a chance of development. However, estimating the quantity of recoverable resources that may exist on discovery is subject to a range of uncertainty. Prospective resources are defined in the SPE Petroleum Resources Management System as the quantities of petroleum that are estimated to be potentially recoverable from undiscovered accumulations, assuming a discovery is made.

New conventional gas resources continue to be discovered in well-explored basins, often leading to the application of new exploration concepts and the extension of existing target horizons. For example, exploration in the Bedout Sub-basin (Roebuck Basin) has resulted in the discovery of new oil and gas accumulations (Phoenix South, Roc and Dorado), believed to be sourced from a Lower Triassic petroleum system. This new Lower Triassic petroleum system is likely to extend into other exploration areas and significantly increase the prospective resources on the North West Shelf. Improved seismic imaging of Jurassic and Triassic sedimentary sequences in the Vulcan Sub-basin (Bonaparte Basin) is driving renewed exploration and discovery of oil and gas resources, including the recently discovered Orchid gas and condensate field. Significant new gas discoveries have also been made in the Perth Basin (Waitsia and West Erregulla fields), Otway Basin (Annie, Dombey, Haselgrove and Enterprise) and Northern Carnarvon Basin (Ferrand).

Exploration for Australia’s unconventional gas resources other than CSG is still in the early stages and has not sufficiently progressed to confidently constrain undiscovered prospective resource estimates. Consequently, our understanding of the undiscovered potential tight gas and shale gas resources in Australia is limited. Assessments of unconventional gas accumulations are subject to multiple uncertainties. They include size and recoverability of the resources, particularly in the early phases of exploration. This is due to limited direct measurement and knowledge of the precise geological characteristics and the lack of production data to estimate recoverability.

As there is a high degree of uncertainty in published resource estimates, all publicly available unconventional gas prospective resource assessments are listed in Table 4. The wide estimate range in potentially recoverable resources is related to different methodologies, assessment areas and data inputs in the resource assessment process, and are indicative of the uncertainty associated with these assessments. The USGS unconventional resources assessments of the Cooper Basin, Canning Basin, Perth Basin and Beetaloo Sub-basin consistently provide the most conservative undiscovered resource estimates as the estimates are fully risked and use predicted well production performance, in the absence of actual production data, to estimate recoverability.

A number of basins have the potential to host significant prospective resources (Table 4; Figure 3 and Figure 4). Greater certainty in Australia’s unconventional gas resources will not, however, be possible until production test data are acquired to define how productive the shale gas intervals are in each basin.

Notes: aStochastically applied factor. bArithmetically applied factor. USGS estimates are based on an estimated ultimate recovery factor using US analogues. In 2018 the South Australian government passed the 10 year fracking moratorium for the South East of South Australia. Victoria has a permanent ban on hydraulic fracturing and a moratorium on onshore petroleum exploration and production until 30 June 2021. NSW and WA currently have restrictions on hydraulic fracturing. PJ = petajoules. Tcf = trillion cubic feet. na = not available. Figure 3. Australia’s undiscovered unconventional prospective gas resources (PJ) based on the aggregation of the largest estimates for each of recoverable shale gas, basin centred gas, tight gas and deep coal bed gas in each basin 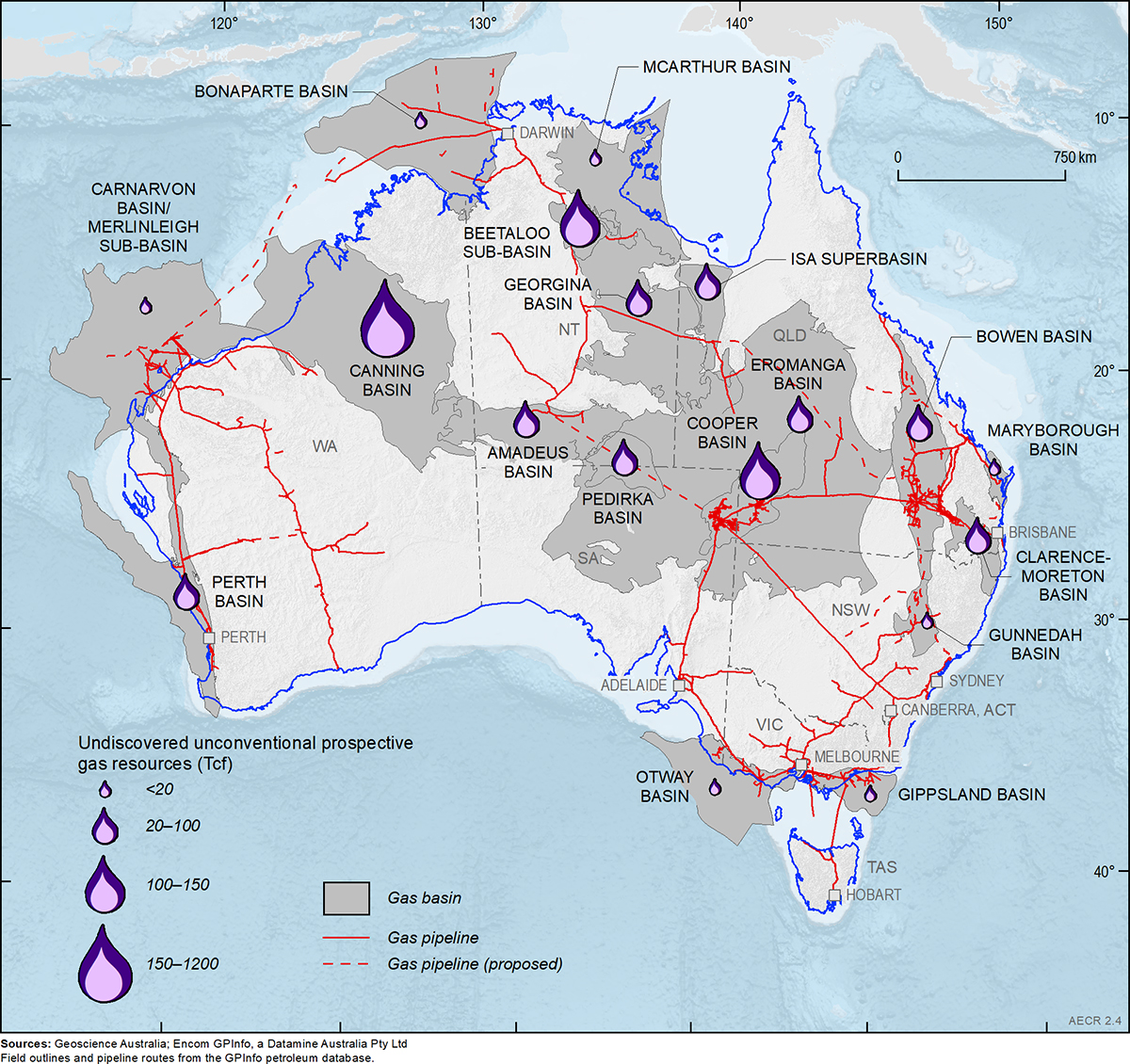 Figure 4. Australia’s undiscovered unconventional prospective gas resources (Tcf) based on the aggregation of the largest estimates for each of recoverable shale gas, basin centred gas, tight gas and deep coal bed gas in each basin

Gas production in Australia has continued to increase substantially (Figure 5 and Figure 6). This is primarily driven by a rapid expansion of the Australian LNG industry, with a number of projects on both the west and east coasts. The most significant production of conventional gas occurs in the basins of the North West Shelf and the Gippsland and Cooper basins, while the most significant production of CSG occurs in the Bowen and Surat basins (Figure 1 and Figure 2).

Conventional gas contributed 74 per cent of natural gas production on an energy content basis (Figure 7; Department of Industry, Science, Energy and Resources, 2020a). Significant CSG production growth in recent years is largely attributable to the expansion of LNG production from three major CSG to LNG plants near Gladstone, Queensland (Queensland Curtis LNG, Gladstone LNG and Australia Pacific LNG). Production of CSG accounted for 26 per cent of Australian gas production in 2018–2019 (Figure 7). At 1,408 PJ, this represents over two-thirds of east coast gas production in 2018‑19 (Department of Industry, Science, Energy and Resources, 2020a). Nearly all CSG is produced from the Bowen and Surat basins in Queensland, with a very small amount produced in New South Wales from the Camden Gas Project in the Sydney Basin. CSG production in the Camden Gas Project is scheduled to cease in 2023. 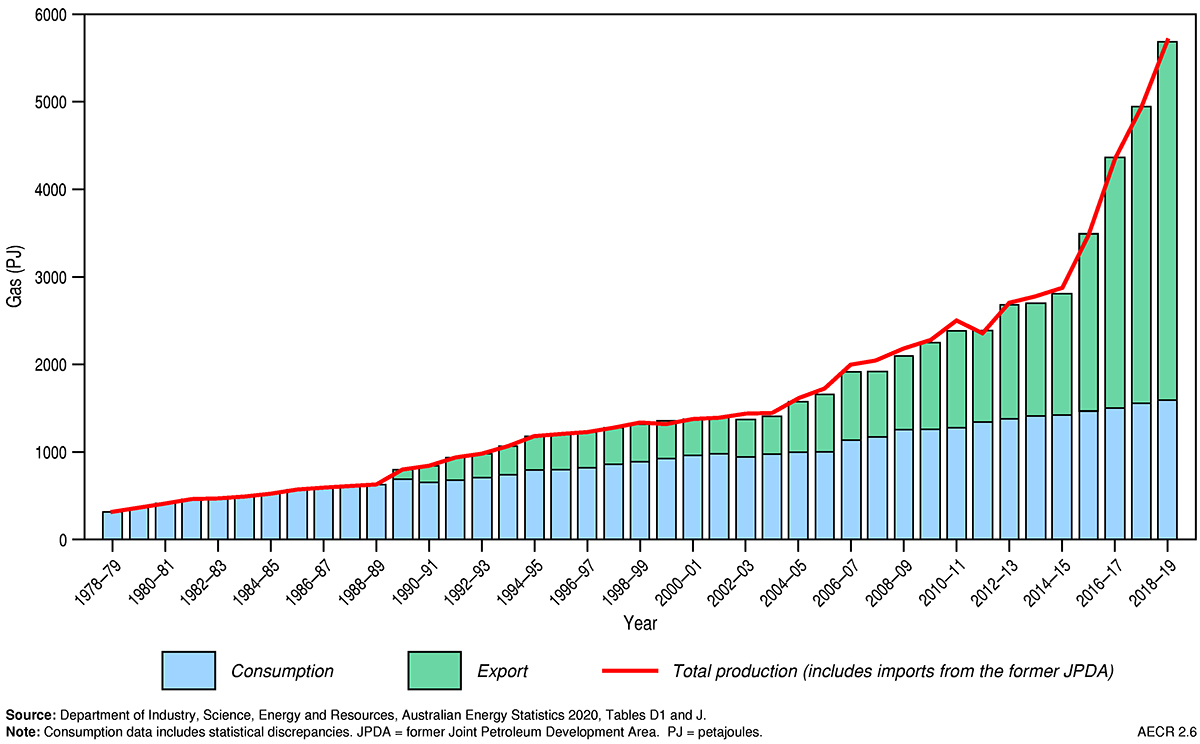 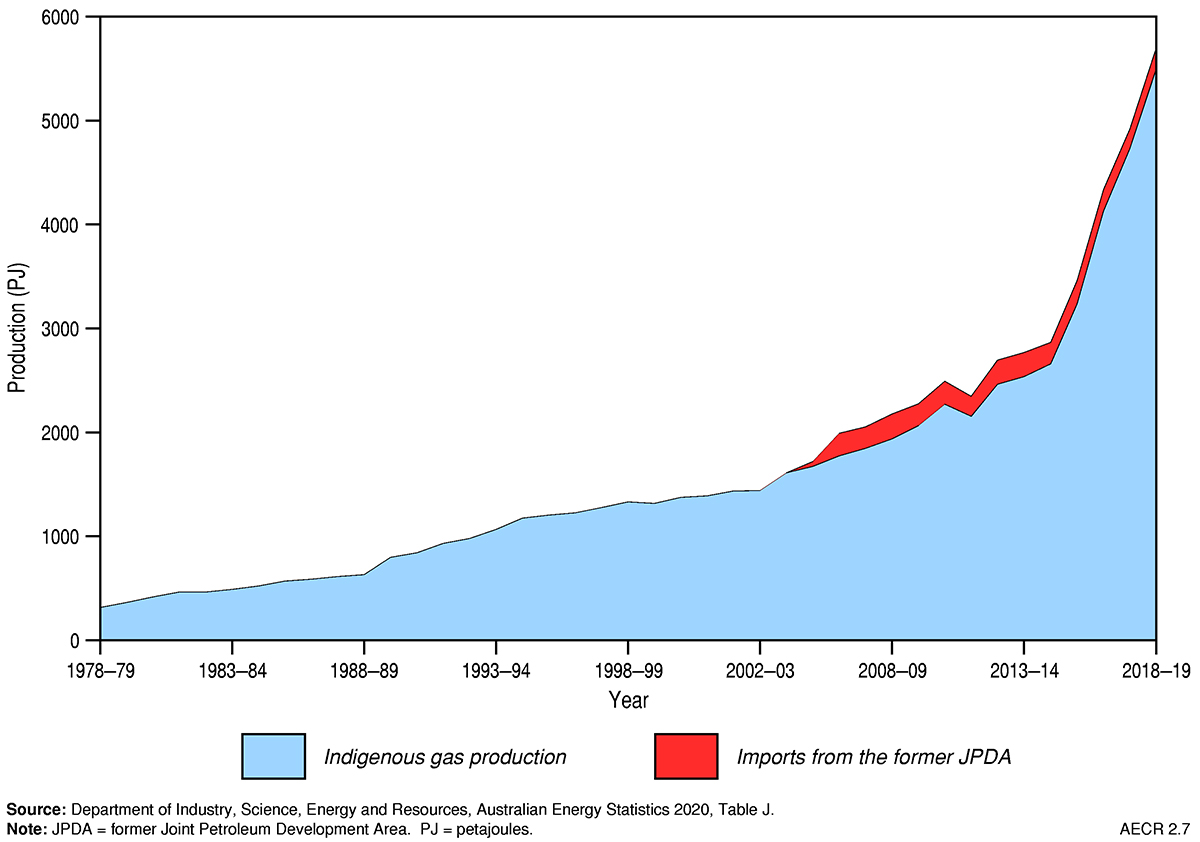 Australia is a substantial net exporter of natural gas (Department of Industry, Science, Energy and Resources, 2020a). About 74 per cent of natural gas produced in 2018‑19 was exported as LNG (Figure 8).

Over the past decade LNG exports from Australia have increased by an average of 17 per cent a year (Figure 9), with several new facilities commencing production in 2019 (Department of Industry, Science, Energy and Resources, 2020a). New export capacity in northwest Australia supported an increase of 21 per cent in LNG exports from 3,376 PJ (62 Mt) in 2017‑18 to 4,094 PJ (75 Mt) in 2018‑19 (Figure 9; Department of Industry, Science, Energy and Resources, 2020a). Australia’s increase in LNG exports was the third highest in the world during 2019, after the United States and Russia (BP, 2020).

Natural gas imports are the gas produced in the former Joint Petroleum Development Area, which is liquefied in Darwin for export (Department of Industry, Science, Energy and Resources, 2020a). Proved world gas reserves in 2019 are estimated by BP (2020) at 7,019.07 Tcf (equivalent to about 7,152,434 PJ; Table 5). Russia, Iran and Qatar held the largest share of global reserves in 2019 (Figure 11 and Figure 12). Australia’s current global ranking for gas reserves is difficult to determine due to a lack of reported proved reserves since 2014, when Australia was ranked thirteenth holding 1.9 per cent of the world’s gas reserves (Geoscience Australia, 2018).

Global LNG exports increased by almost 13 per cent (54 Bcm) in 2019, the largest annual increase ever recorded (BP, 2020). The growth was driven by record increases from the US and Russia, as well as continued growth from Australia. Europe absorbed the exports growth with an unprecedented increase in LNG imports (BP, 2020).

Australian export volumes reached 79 million tonnes in 2019–20, confirming Australia’s position as one of the two major LNG exporters in the world with Qatar (Department of Industry, Science, Energy and Resources, 2020b). 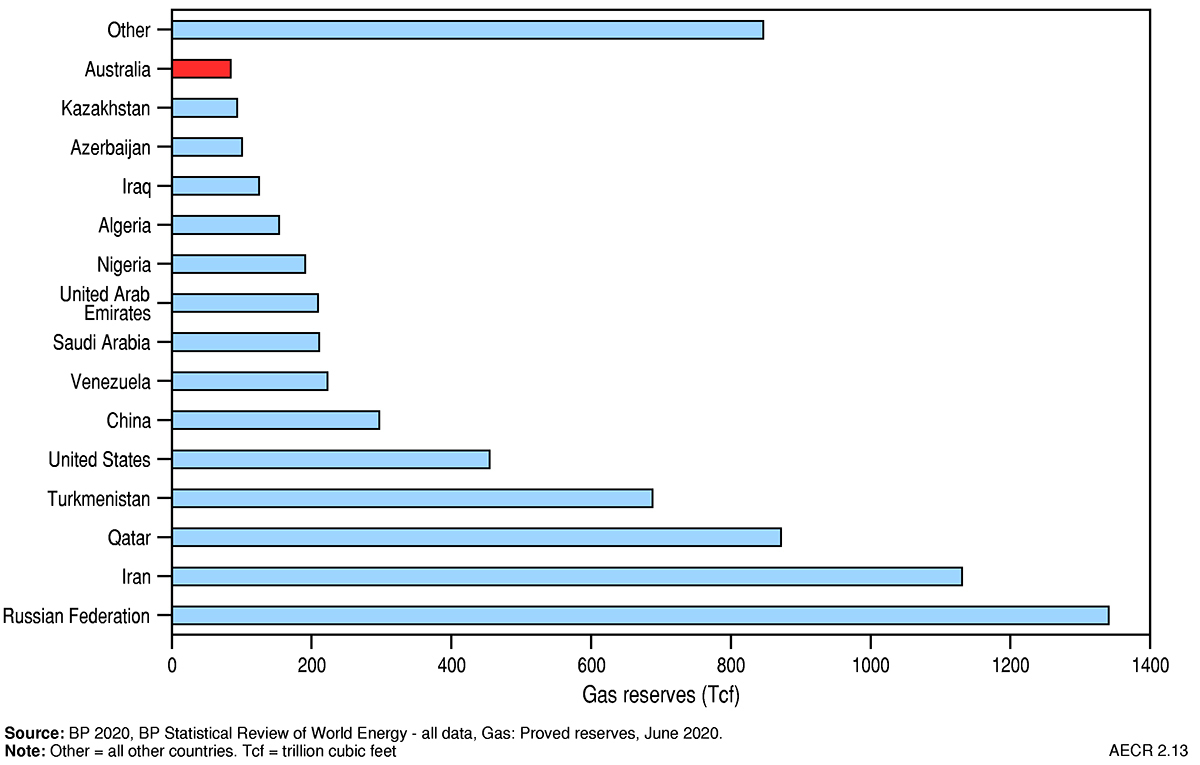 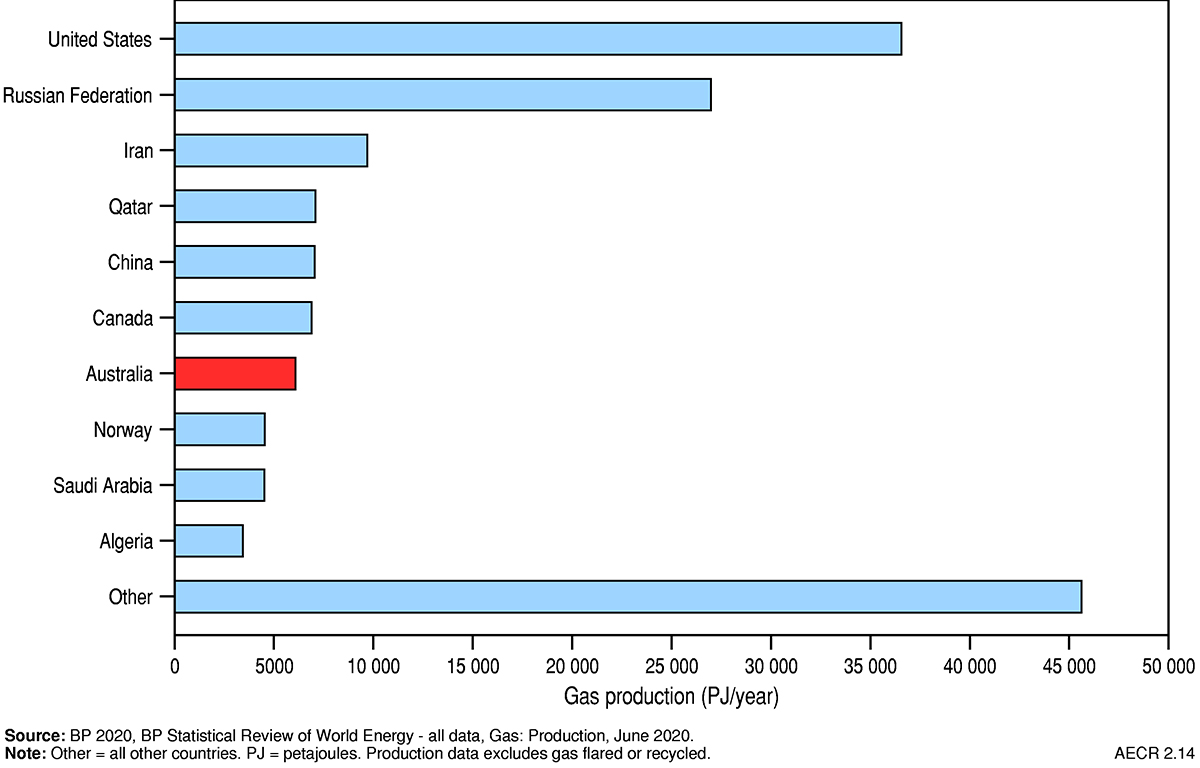 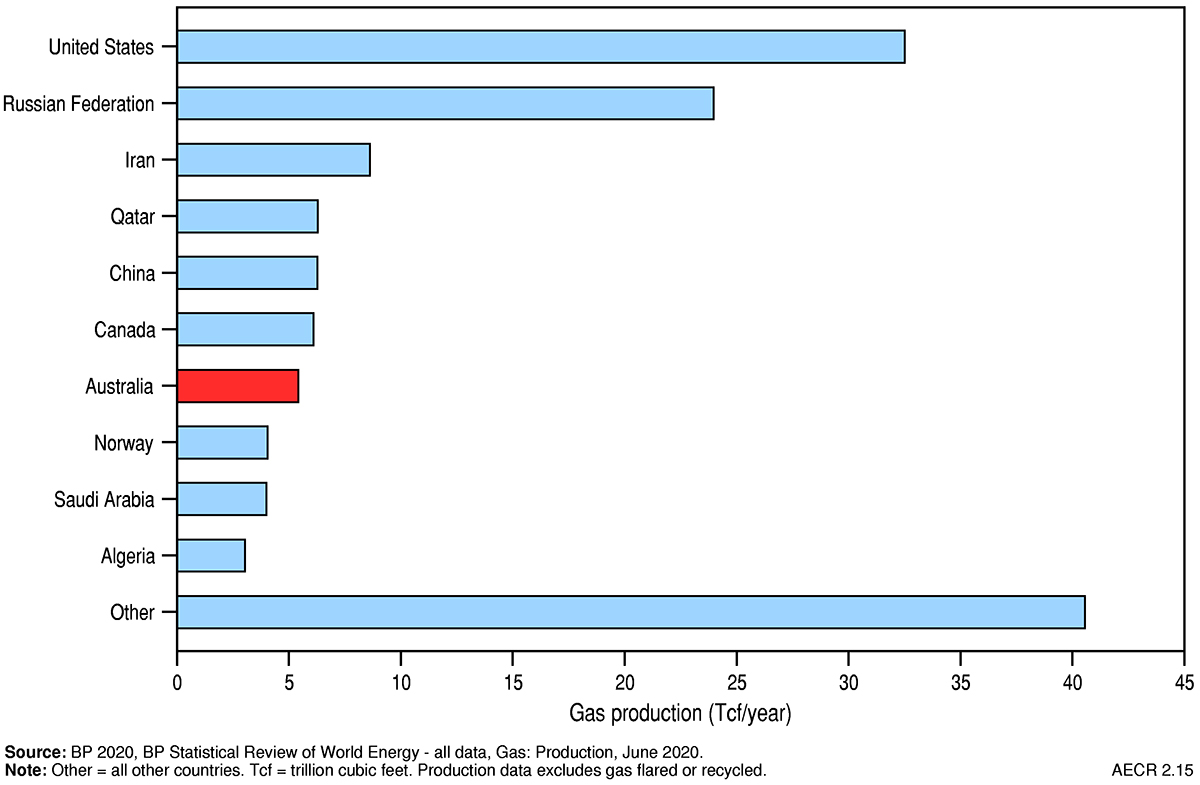