Coal is classified as a sedimentary rock. It is a common non-renewable  fuel used mainly in the production of electricity. It is a fossil fuel because  it forms from dead plant matter. The quality of coal depends on how it formed; as  the organic matter is subjected to greater heat and pressure, the carbon  content increases.

Coal is a combustible rock mainly composed of carbon along with variable quantities of other elements, mostly hydrogen, sulphur, oxygen and nitrogen. Coal occurs as layers, called coal beds or coal seams, that are found between other sedimentary rocks. Coal is slightly denser than water but less dense than most of the rocks of the Earth¿s crust. The density varies depending on how porous (full of holes) the coal is. Sometimes the pores contain a gas called methane. Coal properties vary depending on how much carbon is in the coal  (coal rank). Black coal is so called because of its colour; it varies from  having a bright, shiny lustre to being very dull, and from being relatively  hard to soft. The term 'black coal' is used in Australia to refer to  anthracite, as well as bituminous and sub-bituminous coals. Brown coal is also  called lignite; it contains less carbon and so has less chemical potential  energy than black coal and has more moisture in it. 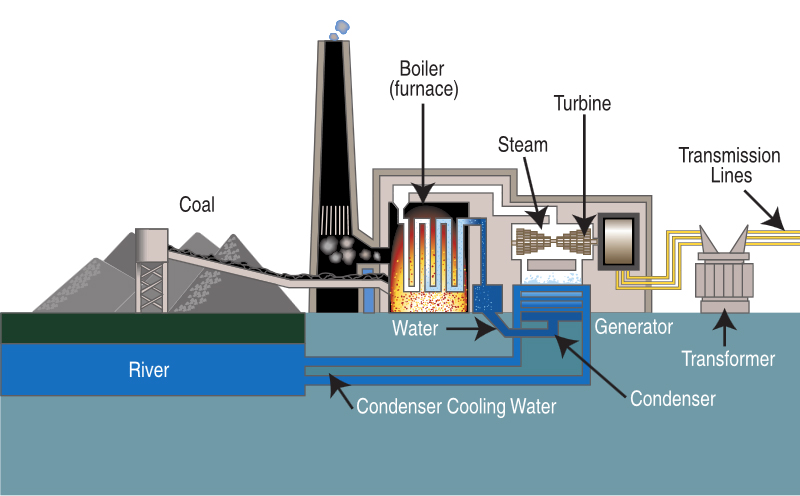 Diagram of a typical steam-cycle coal power plant (proceeding from left to right). Coal burned in the boiler heats water to produce steam. The steam spins the turbine, which drives the generator. Source: Wikimedia Commons

Brown and black coal are mostly used as a source of fuel for power  stations. Burning the coal produces heat which is used to make steam, so the  the coal is sometimes called thermal or steam coal. The steam spins turbines to  generate electricity. In Australia in 2017 coal was used to produce about 60%  of the nation's electricity requirements. Using brown coal for power generation  is problematic because of the high water content. It crumbles easily on  exposure to the air which reduces its value as a fuel and requires specialised  storage. It has also been known to spontaneously combust. Since the 1970s the  amount of natural gas used to generate electricity has increased and there has  been a gradual decline in the use of coal for power. The amount of greenhouse  gases generated by burning gas for energy is far less than the volume produced  by burning coal.

Certain types of bituminous coal are used to make an essential raw material for making steel — coke. This type of coal is also called metallurgical  (steel making) coal and it is processed to produce coke. Coke is a hard porous  substance composed of about 90% carbon, it is vital for making steel which is  used in millions of items such as cars, trucks, fire engines, refrigerators and  bridges.

Coal and peat is still used for residential and commercial  heating in some parts of the world (e.g. Ireland and Finland). In its  dehydrated form, peat is a highly effective absorbent for fuel and oil spills  on land and water. It is also used as a conditioner for soil to make it more  able to retain and slowly release water.

Coal is also an important source of light aromatic hydrocarbons  for the chemical synthesis industry. If coal is heated the gases and residues  produced can be used in manufacturing plastics, explosives, dyes, pitch,  ammonia, medicines, aspirin, soap, disinfectant, detergents, nylons, cosmetics,  shampoo, toothpaste, synthetic rubber, fertilizers, cement, bricks and tiles. It  is an important ingredient used in filters for water and air purification and  in kidney dialysis machines. In addition coal is used to make carbon fibre, a  very strong, light material used in construction, mountain bikes and tennis  rackets.

Jet, a compact form of brown coal, is sometimes polished and has  been used as an ornamental stone. Graphite which is often associated with coal,  is almost entirely made of carbon; it is mostly used in pencils and when  powdered, as a lubricant.

The earliest recognized use of coal is from the Shenyang area of  China around 4000 BC where black lignite was carved into ornaments. Coal from the  Fushun mine in north-eastern China was used to smelt copper as early as 1000 BC.  Marco Polo, the Italian who travelled to China in the 13th century, described coal  as "black stones ... which burn like logs", and said coal was so plentiful,  people could take three hot baths a week.

Coal was used in Britain during the Bronze Age (3000-2000 BC) in  funeral pyres (wooden structure used to burn a body).The Romans were mining coal  in England and Wales by the end of the second century AD. Evidence of trade in coal  (dated to about AD 200) has been found at the Roman settlement near Chester and  in East Anglia. In Rhineland, deposits of bituminous coal were used by the Romans  for the smelting of iron ore. In 1257-59, coal from Newcastle upon Tyne was shipped  to London for the smiths and lime-burners who were building Westminster Abbey.

Easily accessible sources of coal had largely become exhausted (or  could not meet the growing demand) by the 13th century, when underground extraction  by shaft mining was developed. The alternative name was 'pitcoal', because  it came from mines. As steam engines took over from water wheels during the Industrial  Revolution large-scale mining and use of coal grew. In 1700, five-sixths of the  world's coal was mined in Britain.

In Australia, black coal was first discovered in Newcastle in 1791  and coal mining and exports commenced in 1799. These early coal mining activities  made a significant contribution to the progress of European settlement in Australia.  The spread of settlers to other locations in Australia lead to further discoveries.  Mining of black coal occurred near Ipswich Queensland in 1825; at Cape Paterson,  Victoria in 1826; and Irwin River, Western Australia in 1846. Knowledge of the existence  of brown coal in Victoria dates back to 1857 and the Yallourn North open-cut began  production in 1889. In 1878, Taronga Zoo was to be the site of an underground  coal mine until the mining company was stopped by Parliament. Instead, coal was  mined in Balmain until 1931.

The formation of different types of coal. Source: M. Sweeney.

Coal is formed in sedimentary basins. Sedimentary basins are  regions where the Earth has subsided or sunk down. Water and sediments then flow into the basin and  they fill with layers of sediments. Australia's black coal resources range from  Permian to Jurassic in age (299 to 145 million years old), although most are  Permian in age. During this time, the climate was warm in Australia, and  Eastern Australia, including the Sydney Basin was covered by large, meandering  rivers, marshes, bogs and swamps. The sediments deposited in these environments  eventually formed rocks such as shale, sandstone and coal. Brown coal in  Australia formed more recently than the black coals. These are mostly of  Paleogene age (66 to 23 million years old).

Coal is a sedimentary rock formed  when abundant plant material is covered by sediments and the material  accumulates faster than it can decay. The weight of the overlying sediments  compacts the organic layers, increasing the temperature and pressure, which  leads to physical and chemical changes to the plant material. Water, carbon  dioxide and methane are produced and escape, so the material becomes  progressively enriched in carbon. With increasing time, and higher heat and  pressure, the plant material first forms into peat, then is converted into brown  coal, then sub-bituminous coal, bituminous coal, and lastly anthracite.

Australia has the fourth-largest share of coal reserves in the world.  Since the late 1700s about 9100 million tonnes of black coal and about 2300 million  tonnes of brown coal have been mined in Australia and the industry still provides  significant employment, capital investment and domestic and export income to the  national economy. Brown coal occurs in South Australia, Western Australia, Tasmania,  Queensland and Victoria. The Gippsland Basin in Victoria contains a substantial  world-class deposit where seams can be up to 330 m thick. The Otway Basin (Victoria),  the Murray Basin (Victoria and South Australia), the North St Vincents Basin (South  Australia) and the Eucla Basin (Western Australia) also contain significant brown  coal resources. Minor resources occur in Tasmania's Longford Basin. Currently, brown  coal is only mined in Victoria where the open-cut mines at Loy Yang and Yallourn  supply coal to nearby power stations. Brown coal is also mined at Maddingley to  produce soil conditioners and fertilisers. Other products from Victorian brown coal  are briquettes for industrial and domestic use and low-ash and low-sulphide char  products.

Coal is one of Australia’s largest commodity exports with annual  exports. In 2016 coal exports from Australia mainly went to Japan, India, European  Union, Republic of Korea and Taiwan; they were worth about $40 billion.

In Australia, nearly 80% of coal is produced from open-cut mines,  in contrast to the rest of the world where open-cut mining only accounts for 40% of coal production. Open-cut mining is possible because coal seams are close to  the surface. Such mining is cheaper than underground mining and enables up to 90%  recovery of the resource. Many brown coal beds lie close to the surface and can  be hundreds of metres thick, so can be extracted easily and cheaply. Firstly the  topsoil is removed and stored for use later in restoring the disturbed land. The  surface rock (called overburden) covering the coal is then blasted with  explosives and removed by excavators. The uncovered coal is in turn then blasted  to break up the layers and loaded into large trucks which can hold up to 300 tonnes of material. The coal is transported to the processing plant where impurities are  removed.

Coal that is deeper than a few hundred metres under the surface  must be extracted using two underground mining methods. Some coal is mined by the Bord and Pillar method. This is where a machine continually cuts into the coal. It tunnels through the coal seams leaving pillars supported by roof bolts to hold  up the roof. An alternative is longwall mining, which uses a large cutting blade  to slice across the coal layer to remove the coal seam. The coal is then transported to the surface on a conveyor belt. After the coal is mined the machine is dismantled  and relocated to another section of the mine allowing the roof to collapse behind.

Advances in technology have led to the introduction of automated  longwall mining systems. In addition, some mining companies are using  driverless trucks, trains and drones to improve safety and gather information.

Black coal can be used without any processing, but is usually crushed,  screened and sorted according to customer requirements. Sometimes it is also washed  to remove any pieces of waste minerals that do not burn. This improves the  quality and reduces the production of ash when the coal is burned. To wash the  coal it is placed into tanks with liquids and chemicals which assist in  recovering more of the coal as it floats to the surface. The coal is then left  to dry out. It is stored according to size and may be blended, again according  to customer specifications. From there it is stockpiled or stored in bins ready  for transport by road or rail.

Lower quality coal such as sub-bituminous or brown coal can be  refined to remove moisture and other impurities. This increases the efficiency  of the coal as a fuel and reduces emissions of greenhouse gases and other  pollutants, when the coal is burned. In Victoria the brown coal is upgraded by  the Coldry Process. A mechanical shear is used to crush the coal into small  particles, releasing water that was held in the pores (holes) in the coal. The  process produces a denser coal in pellet form.