Bathymetry is the study and mapping of the sea floor. It involves obtaining measurements of the depth of the ocean and is the equivalent to mapping topography on land.

Bathymetric data is used for a range of purposes including:

Generally very little is known about the sea floor. Existing maps of the sea floor are often low resolution, having been derived from satellites, and only provide a general indication of water depth. 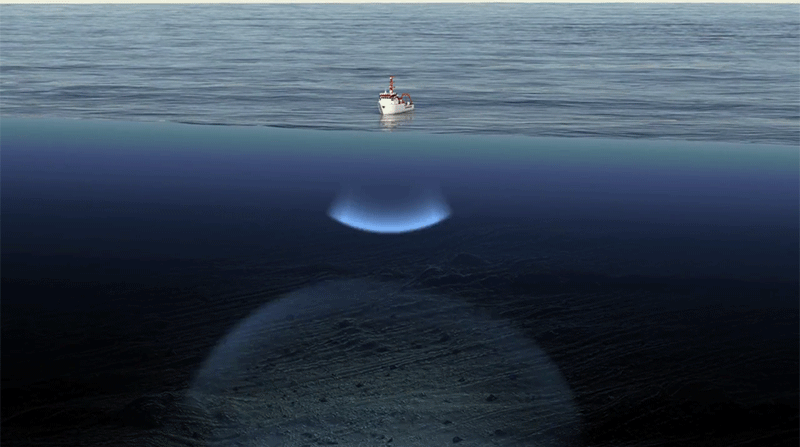 Figure 2: The sonar system mounted
on the hull of the vessel sends out
soundwaves that bounce off the sea
floor and return to the ship.

Geoscience Australia collects bathymetry data in multiple ways, mostly commonly using multibeam surveys. During a bathymetric survey, a multibeam sonar system is mounted on the hull of a survey vessel. The sonar system sends out multiple soundwaves that bounce off the sea floor and return to the ship. The delay between sending and receiving the signal provides a measurement of ocean depth (Figure 2). These measurements are then used to produce a map charting the sea floor.

Acquiring high resolution multibeam data is time-consuming because the survey vessel moves through the area in overlapping lines to capture the data in a systematic way (Figure 3). Overlapping the lines increases confidence in the data’s accuracy and helps address any gaps in the data caused by factors such as bad weather. Figure 3: The ships path is regularly
spaced and the soundwaves overlap
to ensure all areas are covered.

Different frequencies are used to map different water depths. Overall, the higher the frequency, the better the resolution of data produced, because the high frequency soundwaves will reach the seafloor at more of an angle, creating better return signal. However, high frequency waves dissipate faster and as such, in deep water, they may dissipate before reaching the seafloor. As a result, higher frequencies (greater than 100 kHz) are used for shallow water and low frequencies (less than 30 kHz) are used for deeper water.

As the depth of the water increases, the resolution of the data decreases because of two factors:

When processing multibeam bathymetry data, corrections need to be made to allow for factors such as water salinity, sea temperature and ocean depth; as these factors affect how quickly sonar signals travel through the water.

Geoscience Australia uses datasets acquired internally and by other agencies and companies to produce a range of products to meet Government and scientific needs. These include:

The Australian Hydrographic Office retains a copy of every bathymetric survey acquired in Australian waters to be used for charting and navigation purposes.