A new strategic direction for the Australian minerals exploration industry 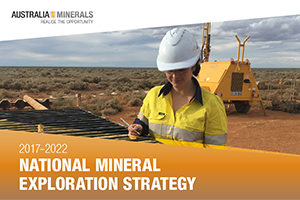 The mineral resources sector plays a vital role in Australia's ongoing economic prosperity. This new strategy will ensure the continuity and longevity of this essential industry for the benefit of all Australians. In 2015-16, mining directly contributed around 6 per cent of Australia's GDP, employed more than 228 000 people and generated 50 per cent of the nation's export earnings.

While Australia is an established and stable destination for mineral exploration, its share of global exploration investment has been declining over the past two decades. In 2002 it attracted 21 per cent of global exploration investment for commodities such as gold, copper and other metals. This had fallen to 12 per cent by 2013; due in large part to a lack recent discoveries of large high quality mineral deposits, such as Mt Isa, Broken Hill and Olympic Dam.

"The mining sector contributes significantly to the nation's export earnings, provides substantial direct and indirect employment and investment in regional and indigenous communities, supports downstream and service industries, and delivers essential revenue to all levels of government."

"An ongoing pipeline of mineral resource projects is needed to meet the future economic needs of our nation, as it currently takes over 12 years on average between the discovery of an economic deposit and the commencement of mine production."

Geoscience Australia has played a key leadership role in developing the Strategy, which draws on the collective capabilities of the Commonwealth, state and North Territory geological surveys to help identify prospective regions and unlock Australia's future mineral wealth.

The Geoscience Working Group under the auspices of the COAG Energy Council, will work to deliver the National Mineral Exploration Strategy in partnership with key industry and academic stakeholders. The Strategy addresses key technical risks and the science and technology of mineral discovery required to unlock the potential of underexplored regions of Australia. This is particularly important to support discovery of mineral deposits under sediment cover, which occurs over vast areas of the continent.

This work is undertaken as part of the broader UNCOVER research initiative which focuses Australia's relevant geoscience effort on providing the knowledge base and technology that will substantially increase the success rate of mineral exploration in Australia.