New digital infrastructure and technologies developed by Geoscience Australia are on show this week in Melbourne at evokeAG. , the Asia Pacific region’s largest agrifood tech event.

Place, Space and Communities Chief of Division Alison Rose said meeting and collaborating with industry sectors such as agriculture is essential to ensuring these innovations benefit all Australians.

“Industry users are at the centre of the new satellite infrastructure and technologies we are developing and introducing to the Australian market,” Ms Rose said.

“We have already started working with the agriculture industry to better understand how they can benefit from having access to high quality satellite data and information. 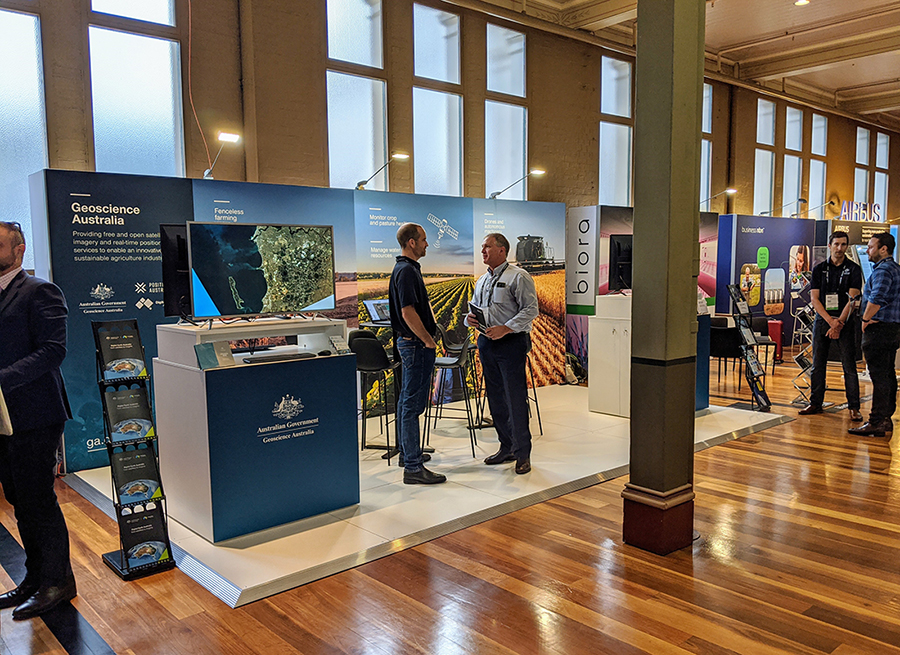 Geoscience Australia at evokeAG. in Melbourne.

“For example, in 2019 we funded three agriculture projects for a small scale, targeted incubator program designed to help local businesses utilise information on physical changes in the Australian landscape collected from satellites.

“These projects are developing new practical tools that can be applied in the paddock, including a decision tool for meat producers, an app that automatically maps paddocks, and a pasture analytics tool.”

The incubator program was established by Geoscience Australia and FrontierSI as part of Digital Earth Australia (DEA). DEA is a world-leading digital transformation program, unlocking the potential of more than 30 years of satellite images to detect physical changes across Australia in unprecedented detail.

Following EvokeAG,, DEA will be running a series of discovery workshops to explore how Geoscience Australia can support the agriculture industry to make greater use of satellite imagery. Anyone interested in getting involved should email dea@ga.gov.au

Ms Rose said in addition to making satellite data and images more accessible to industry, Geoscience Australia is working to ensure accurate and reliable satellite positioning information is made widely available through the Positioning Australia program.

“We already know from a test phase that an accurate positioning technology known as a Satellite-Based Augmentation System (SBAS) has the potential to deliver approximately $2.2 billion in economic benefits to the agriculture industry in Australia,” Ms Rose said.

“Following a $225 million investment over four years from the Australian Government, we are securing an operational SBAS and investing in a national positioning network. This will give all Australians access to instant and reliable location data accurate from three to five centimetres in areas where there is mobile phone coverage.

“This is particularly beneficial to our farmers who can improve irrigation, use less pesticide, and increase production.”

Ms Rose said this is only the beginning of what Geoscience Australia programs like Positioning Australia and Digital Earth Australia can deliver for the agriculture industry.

“When it comes to these innovations, we’ve only just begun to see the green shoots of the future,” Ms Rose said.