Mineral deposits hosted in orthomagmatic mafic-ultramafic rocks are associated with mantle-derived magmas that have undergone a high degree of partial melting. They have been identified in various tectonic settings including continental rifts, continental rifted margins, continental large igneous provinces, mid-ocean ridges and mid-continent anorogenic provinces. The mineral system can form Ni-Cu, Ni-Cu-Co and Ni-Cu-PGE sulfide deposits, as well as chromitite and Fe-Ti-V oxide deposits found in association with magnetite (Figure 2.5.1).

Layered mafic-ultramafic tholeiitic or komatiitic intrusions are present in Australian Archean cratons or Proterozoic orogens and host some of the largest deposits in Australia. Continental rifts are an ideal setting for emplacement because the mantle-derived magma can reach the crust easily (Barnes and Lightfoot, 2005). Most intrusions are differentiated into a lower ultramafic zone where Ni-Cu sulfide and chromitite deposits form, and an overlying mafic zone where Fe-Ti-oxides crystallise, with PGE deposits located close to the mafic-ultramafic boundary.

Iron-Ni-Cu±PGE sulfide deposits can occur within komatiitic volcanics found within Archean greenstone belts. The ore deposits are usually located at the base of flows, controlled by structural traps such as faults and folds or found within associated dykes and sills.

Chromitite can also be found as podiform deposits within complexes of oceanic crust and upper mantle that were emplaced at convergent plate boundaries. More specifically, chromitites form where melts react with sections of subducted old lithospheric mantle at the plate boundary (Zhou and Robinson, 1997; Cawthorn et al., 2005). These are not as large as those found within mafic-ultramafic intrusions. All major ophiolite-related chromitite deposits are Phanerozoic in age ranging from 500 Ma (Thetford, Canada) to 10 Ma (New Caledonia) (Stowe, 1994).

Mafic-ultramafic mineral systems can also involve laterites, as well as hydrothermal and placer deposits. These are discussed in other sections of this report. 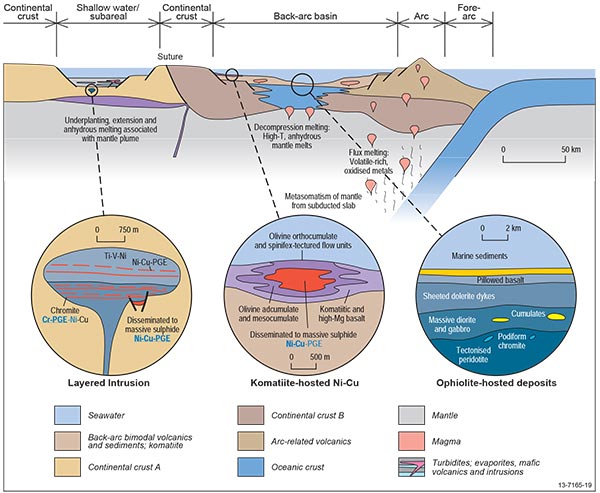 Magmas are the source of fluid, metals and energy in orthomagmatic mafic-ultramafic volcanic deposits. The generation of mafic and ultramafic magmas usually takes place in the asthenospheric or lithospheric mantle. A high degree of partial melting and large volumes of magma are required to produce a silicate liquid that is rich in base metals (Barnes and Lightfoot, 2005).

As the amount of S in the mantle and derived melts is very low (10–400 ppm), the addition of S to the magma is critical for mineralisation. Moreover, the timing of S addition is also very important. Although Ni partitions into sulfide liquid in preference to silicate magma and crystallising minerals, in the absence of immiscible sulfide liquid, Ni preferentially partitions into olivine, which controls its abundance until sulfide melt saturation (Barnes and Lightfoot, 2005). Possible mechanisms for rapid S saturation include crustal contamination, assimilation of crustal metals that are rich in S, crystal fractionation or magma mixing (Hoatson, 1998). However, early S saturation could also deplete the magma of Ni and other base metals, and the resulting base metal sulfide liquid could settle out of the magma before emplacement (Barnes and Lightfoot, 2005).

The amount of Cr, PGE and V within the magma is also minor. Enrichment factors, relative to the magma, of about 1000, 1000 and 400 respectively are required to produce an economic deposit (Cawthorn et al., 2005). Many different process may operate to produce enrichment, including assimilation of chalcophile metals such as PGE, Au, Ag, Ni and Cu by sulfide droplets (Barnes and Lightfoot, 2005).

In many mafic-ultramafic volcanic or intrusive systems the magma rises to the lithosphere as a plume. As Ni has a moderate partition factor with olivine the Ni-Cu sulfide magma needs to reach the crust with minimum olivine fractionation and sulfide segregation (Barnes and Lightfoot, 2005). Faults and other associated structures are, therefore, important pathways for the magma to be emplaced or extruded rapidly (Hoatson, 1998). If the plume does not rise at a plate boundary, Begg et al. (2010) suggest that the plume will rise beneath the thick lithosphere and then be channelled by the lower boundary of the lithosphere to areas of thinner lithosphere adjacent to a cratonic margin where it will be extruded or emplaced.

Layered mafic-ultramafic intrusions usually have a well defined and predictable structure that can contain multiple ore bearing horizons. The base of the intrusion has an ultramafic composition ranging from dunite, lherzolite, harzburgite, websterite, clinopyroxenite and orthopyroxenite (Hoatson, 1998). Nickel-Cu sulfides can settle out at the base of the intrusion as the velocity of the magma decreases when it enters the magma chamber (Barnes and Lightfoot, 2005). Chromium also drops out of the melt early and, therefore, layers rich in chromitite can also be found at the base of the intrusion and are associated with olivine and orthopyroxene (Hoatson, 1998). Sulfide bodies containing Ni, Cu and PGE are commonly found in pyroxenitic layers near the stratigraphic level that plagioclase first becomes a cumulus mineral (150 m below to 500 m above the mafic-ultramafic boundary) or mineralisation may also occur at the base of cyclic units (Hoatson, 1998). The top half of the intrusion is mafic and here the host rocks are typically norite, gabbronorite and troctolite (Pirajno and Hoatson, 2012). Near the top of the fractionated mafic stratigraphy Ti-V oxides can be found and consist of layers and lenses of massive disseminated titanomagnetite or vanadium-magnetite (Pirajno and Hoatson, 2012). Mafic-ultramafic pipes may be associated with intrusions and these can also contain mineral deposits. The depositional processes involved in these layered intrusions are thought to involve multiple injections of magma and in some cases contamination to obtain sulfur saturation (Hoatson et al., 2006).

Nickel-Cu sulfide deposits are also found within flow-dominated volcanic environments. They occur when komatiitic magmas reached the surface and attained sulfur saturation through melting or assimilation of sulfur-rich footwall rocks. For example, mineralisation can occur if the lava is extruded onto a sulfur-rich deep marine facies (Houle et al., 2008). Massive sulfide deposits then form in restricted channels at the base of flows or disseminated nickel mineralisation can occur within sill or dyke intrusions (Markwitz et al., 2010). Mineralisation is restricted to two facies: compound sheet flows with internal pathways or dunitic compound sheet flows (Hoatson et al., 2006).

Podiform chromitite deposits are usually comprised of small, irregularly folded, and dislocated pods that are lenticular in shape. Within ophiolite complexes mineralisation is confined to the dunites in either the lower mantle-derived peridotites or the transitional zone between the depleted upper mantle peridotite and the layered gabbro cumulate rocks (Figure 2.5.1). For enrichment of chromite to occurs olivine and chromite must be physically separated in the melt, however, the mechanism for enrichment remains unknown (Matveev and Ballhaus, 2002). Crustal contamination and magma mixing are unlikely scenarios for their formation. Contamination is unlikely as no silica-rich material is readily available and magma mixing requires magma volumes unlikely to occur in these settings (Irvine, 1975; 1977; Lago et al., 1982; Paktunic, 1990; Cawthorn et al., 2005).

In 2012, Australia was the largest holder of economic Ni resources with 26.8% of the world's resources (Geoscience Australia, 2013). Australia's Ni production is dominated by komatiite deposits (82%) that are associated with Archean greenstone sequences, whereas, the majority of Australia's Ni resources are located in laterite deposits (69%) (Hoatson et al., 2006). This is in contrast to the world situation where komatiite deposits (18%) provide the fourth largest contribution after flood basalts (30%), astrobleme (20%) and basal sulfide associations (20%) (Hoatson et al., 2006).

Australian Archean komatiite-hosted and layered mafic-ultramafic intrusion Ni deposits are largely confined to the older crustal components of Western Australia and South Australia (Hoatson et al., 2009). The most significant Archaen deposits are located in the Eastern Goldfields Superterrane of the Yilgarn Craton, and with smaller deposits and prospects known in the Pilbara Craton (e.g., Radio Hill) and the Gawler Craton (e.g., Harris Greenstone Belt). The Proterozoic orogenic deposits are located in the Halls Creek Orogen, the Litchfield Province and the Albany-Fraser Orogen. In 2013, most of Australia's nickel was produced from the Leinster, Mount Keith and Cliffs mines located north of Kalgoorlie (Geoscience Australia, 2013).

The mafic-ultramafic rocks in the Yilgarn Craton are related to magmatic events dated at 2800 Ma in the Windimurra intrusion (Sm-Nd age: Ahmat and Ruddock, 1990) and 2705 Ma for komatiitic flows in the Eastern Goldfields Superterrane (Kent and Cassidy, 1996). The Mount Keith Ni deposit, in the Eastern Goldfields Superterrane, contains one of the largest komatiite-associated Ni resources in the world with a total resource of 335 Mt at 0.52% Ni (Hoatson et al., 2006; BHP Billiton Limited, 2013). Other large komatiitic-hosted magmatic Ni sulfide deposits located in the Yilgarn Craton include the Perseverance, Kambalda, Yakabindie and Honeymoon deposits (Markwitz et al., 2010).

The Pilbara Craton has one of the oldest known mineralised layered intrusions in the world (Hoatson, 1998). The Munni Munni Complex is dated at 2927±13 Ma (Sm-Nd mineral isochron age: Sun and Hoatson, 1992), and the same magmatic event has produced a wide range of mineralisation including PGE, Cr, V and Ti. For example, the Radio Hill intrusion is a small mafic-ultramafic body that contains the most significant known Ni-Cu-Co sulfide resources in the Pilbara Craton (Hoatson et al., 2006). The mothballed Radio Hill mine has a Ni resource of approximately 27 400 tonnes (4.22 Mt at 0.65% Ni and 0.76% Cu) and a Pd resource of 1.275 Mt at 0.493 g/t (Geoscience Australia, 2013). Most of the mineralisation occurs in structural depressions along the basal contact and in a feeder conduit (Hoatson et al., 2006). In contrast the Munni Munni intrusion, located in the Pilbara Craton, contains the one of the largest PGE resources in Australia (Table 2.2.1: Hoatson et al., 2006; Geoscience Australia, 2013).

Other examples of mineralised Proterozoic mafic-ultramafic intrusion are the intrusions hosting the Nebo and Babel deposits within the Musgrave Province in Western Australia. The combined Nebo-Babel Ni-Cu-PGE deposit (Table 2.2.1) consists of both disseminated and massive sulfides that are hosted within a grabbronorite magma conduit emplaced into a sulfide-free orthogenisis at 1068 Ma and off-set by a fault (Seat et al., 2009; Godel et al., 2011). In this case, S saturation is thought to have originated in the mantle and crystallisation involved multiple magma pulses. The entrained sulfide accumulated in physical traps on the way to the conduit and was later emplaced along the footwall contact (Seat et al., 2009).

More recently, the Nova Ni-Cu deposit (Table 2.2.1) was discovered undercover by a drill hole that intersected 4 m of mineralisation at 4.02% Ni and 1.41% Cu on 21 July 2012. The drill hole was testing a large electromagnetic anomaly that is the first of four anomalies to be tested (Sirius Resources, 2012). From initial drilling the style of mineralisation appears more similar to large Proterozoic magmatic sulfide deposits located in Canada rather than the typical Western Australian ultramafic-associated deposits (Sirius Resources, 2012).

Platinum-group elements include Pt, Pd, Ir, Os, Rh and Ru. Within layered mineral intrusions Cu-rich zones can be enriched in Au, Pd and Pt and Cu-poor zones can be enriched in Os, Ir, Ru and Rh. Western Australia and the Northern Territory currently have all of Australia's PGE EDR, with the EDR for Western Australia associated with orthomagmatic deposits. However, the concentrations of PGE in orthomagmatic deposits are commonly not recorded (Geoscience Australia, 2013), and several other magmatic-related PGE prospects (e.g., Fifield in NSW) are known elsewhere in Australia. Although 60% of Australia's total PGE resource is located in deposits that have PGEs as the major commodity, in 2012, all of Australia's production was as a by-product from PGE resources associated with Ni sulfide deposits in Western Australia (Geoscience Australia, 2013).

Chromite deposits in Australia are either found within layered mafic-ultramafic intrusions in Western and central Australia or within Phanerozoic aged serpentinised ultramafic-mafic complexes within the Tasmanides. The only mine that is currently producing chromitite in Australia is located in the Coobina ultramafic intrusion in the Pilbara Craton (Consolidated Minerals Limited, 2012). It is a 10 km long dyke-like body that contains numerous pods and lenses of chromitite interlayered with serpentinite (Bye, 1975; Tyler, 1991).

Titanium- and V-bearing magnetite mineralisation can occur in the upper parts of mafic-ultramafic igneous complexes. The Windimurra, Lady Alma, Barrambi and Youanmi igneous complexes, which are all part of the ˜2810 Meeline Suite located in the Yilgarn Craton, host this style of mineralisation (Ivanic et al., 2010). In 2012, Windimurra was the only producing V mine in Australia and had a total resource of 242.6 Mt at 0.48% V2O5 representing 654 000 tonnes of contained V.