Most deposits that form in the granite-related mineral system (Figure 2.3.1) are associated with felsic magmatic rocks in orogenic belts well inboard of plate margins during mineralisation (Thompson and Newberry, 2000). Granite emplacement typically has an orogenic to post-orogenic timing, with pegmatite belts emplaced during tectonic reactivation of shields and platforms. In many cases the granites and pegmatites are localised along deep fault systems that can coincide with major metamorphic and tectonic boundaries (Hart, 2007).

The broad compositional character (I-, S- or A-type; metaluminous, peraluminous or peralkaline) of granites serves as an important guide to the abundance of elements and volatiles in the granites, and their behaviour during fractionation processes (Blevin, 2004). Tin, W, and F tend to be associated with reduced, fractionated I-type or S-type granites, whereas peralkaline granites tend to be strongly compositionally evolved and high in Ta, Nb, Li, Be and related elements. The cooling and crystallisation of these peralkaline granites may also result in the formation of pegmatites which are valued for the suite of rare elements (e.g. in Ta, Nb, Li, and Be) that tend to be concentrated in the residual magmas. ?erny (1993) classified rare element pegmatites into two groups, LCT (Li-, Cs- and Ta-rich) and, NYF (Nb-, Y- and F-rich) types. Martin and de Vito (2005) suggested that LCT-type pegmatites form during crustal shortening, subduction and collision, whereas NYF-type pegmatites form during crustal attenuation. 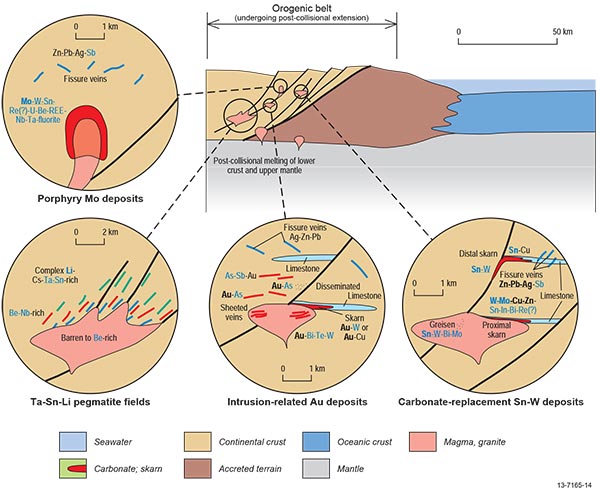 2.3.2 Sources of fluid, metals and energy

Three models have been put forward concerning the formation of pegmatites. The magmatic model (London, 2008) proposes that pegmatites represent pneumatolitic, exsolved granitic fluids that crystallise in the country rocks. The metamorphosis model (Simmons et al., 1996) infers that pegmatite fluids are created by dewatering of metamorphic rocks in the thermal aureoles of granite. As a consequence, the pegmatite fluids have a granitic character and most of the time they match the character of nearby granites. The final model, the metasomatic model, infers that in rare situations, the interaction of heated fluids with rock can result in major changes in rock textures and composition, resulting in pegmatite formation (Schaller et al., 1925). Of these, the most probable model is the magmatic model.

Like the porphyry-epithermal mineral system, fluid pathways in the granite-related mineral system include faults and shear zones, stratigraphic aquifers and the mineralising magmas themselves. The most important ore controls are faults and shear zones, which not only control the flow of hydrothermal fluids, but also the emplacement of magmas. In many cases, mineralisation is localised in or above the apices of granitic cusps and ridges as these features concentrate magmatic-hydrothermal fluids evolving as the magmas crystallise. In some cases, structures associated with the formation of granite cusps or ridges allow fluid movement hundreds of metres to kilometres from the causitive granite, producing distal skarn or carbonate replacement bodies well removed from the granite (e.g., Renison: Kitto, 1998). Pre-existing structures and structures associated with granite emplacement can also control the distribution of the outer Zn-Pb-Ag deposits.

Localised controls on fluid flow and ore deposition include variations in vein structure, lithologic (e.g., presence of carbonate units) and structural changes, vein intersections, and cross-faults. Many pegmatite bodies are controlled by shear zones and may be syn-metamorphic and syn-kinematic.

Depositional processes in the granite-related mineral system are similar to those in the porphyry-epithermal mineral system, and involve magmatic-hydrothermal fluid evolution from crystallising magmas, depressurisation (including second boiling), mixing with ambient fluids, cooling and water-rock interaction, the last process is particularly important in forming skarn deposits hosted by carbonate rocks.

Crystal growth rates in pegmatite must be incredibly fast to allow gigantic crystals to grow within the confines and pressures of the Earth's crust. For this reason, the consensus on pegmatitic growth mechanisms involves a combination of the following processes (London, 2008):

There are five major Sn and W provinces in the Tasmanides of eastern Australia (Figure 1.5.2). The western Tasmanian province, which includes King Island (Table 2.2.1), has produced over 142 kt of Sn and more than 63 kt of WO3 (Solomon and Groves, 1994). There are a wide variety of deposit types including distal skarn tin deposits (e.g. Renison, Mount Bischoff, Cleveland, Queen Hill and Razorback), proximal Sn skarns (Mount Lindsay), greisens (e.g. Heemskirk), and quartz-cassiterite-wolframite systems (e.g. Shepherd and Murphy, Balfour, Oakleigh Creek and Interview River, not shown in Figure 2.2.1), with ages between 365 and 350 Ma (Champion et al., 2009). The east Tasmania province, which, at 380-375 Ma (Champion et al., 2009), is slightly older than the west Tasmania province, has yielded about 90 kt of Sn and about 14 kt of WO3 (Solomon and Groves, 1994). Major deposits include Aberfoyle, Storey's Creek, Scamander, Rex Hill and Anchor.

The Wagga-Omeo Sn province (Figure 1.5.2, which ranges in age from 410 Ma to 430 Ma (Champion et al., 2009), extends from Victoria into central New South Wales and contains the Tallebung, Minter, Ardlethan-Gibsonvale (non-JORC-compliant resources of 3.025 Mt gading 0.42% Sn) and Mount Paynter deposits. In 2008, Dart Mining discovered the Unicorn porphyry Cu-Mo-Ag deposit (Table 2.2.1) in northeastern Victoria, which was interpreted as a Climax-type porphyry Mo deposit (Hochwimmer, 2012). This deposit is located south of the Holbrook disseminated Mo-Sn-Cu deposit, which has an age of ˜421 Ma (Norman et al., 2004). These two deposits are at the southern end of the Wagga tin province. Although the Doradilla Sn deposit (Table 2.2.1) is geographically just north of this province, it is significantly younger (˜231 Ma: Burton et al., 2007) and probably related to a younger mineralising event associated with the evolution of the New England Orogen.

The Stanthorpe Sn province (Figure 1.5.2) occurs in north-eastern New South Wales, within the New England Orogen. The most important granite in this region is the Mole Granite, which is associated with over 150 individual tin deposits, including the Yankee, Wallaroo, and Dutchman's deposits. Deposits associated with the nearby Ruby Creek Granite have ages of ˜242 Ma (Norman et al., 2004). A polymetallic resource, including In, has been established for the Conrad project and a W-Mo resource has been established for the Attunga deposit (Table. 2.2.1). A pre-JORC resource of 37.589 Mt grading 0.153% Sn was defined for the Taronga deposit in 1981.

The Sn and W fields of northeastern Queensland (in Kennedy Igneous Province: Figure 1.5.2), which include the Herberton, Collingwood, Mt Carbine and Kangaroo Hills Sn provinces of Solomon and Groves (1994), have yielded over 150 kt of Sn and over 4 kt of wolframite from about 2000 mines and prospects. Major deposits in this region include Baal Gammon, Collingwood, Mount Carbine, Wolfram Camp (W-Bi-Mo), Mount Garnet (Figure 2.1.1), Great Southern, Morning Cloud, Smiths Creek, Pinnacles, Windermere and Watershed (not shown in Figure 2.1.1), and Mount Garnet. In 2012 mining recommenced at the Baal Gammon deposit west of Herberton based on a total resource of 2.679 Mt grading 1.0% Cu, 40g/t Ag, 0.2% Sn and 38 g/t In (at the time of writing the Sn was not recovered). Undeveloped resource estimates have recently been released for the Mount Garnet project (Table 2.2.1), including both Sn and fluorite resources. These Sn fields are spatially and temporally associated with the 315-260 Ma Kennedy Igneous Province (Champion et al., 2009).

Rare-metal pegmatites and alkaline igneous rocks are the dominant source of Ta, Nb, Li, and Be in Australia. Alkaline igneous rocks are discussed later in this chapter. The Archean North Pilbara Craton contains at least 120 pegmatite deposits in over 27 pegmatite groups and fields (Pilbara Ta-Sn-Li-W province: Figure 1.5.2), including the giant Mount Cassiterite Ta orebody (ore reserves not reported) in the Wodgina pegmatite district. A number of pegmatites are also known to occur in the Archean Yilgarn Craton (Southern Yilgarn Ta-Sn-Li province: Figure 1.5.2) and the most significant of these are the producing Greenbushes (total resources of 120.5 Mt grading 2.4% Li2O as of 30 September 2012; Ta-Sn resources not reported) and Mount Cattlin (18.188 Mt grading 1.08% Li2O and 156 ppm Ta2O5) deposits. Proterozoic pegmatite swarms also occur in the Arunta Region in the Northern Territory. Pegmatites in the Harts Range region, informally named the Entia pegmatite field, appear to be analogous to the NYF-type pegmatite and associated granitic suite of Cern (1991).

An unusual deposit that may be part of the granite-related mineral system is the Mary Kathleen deposit in northwest Queensland, which was mined for U until the 1970s. This deposit, which produced over 10 kt U3O8, is a garnet-pyroxene skarn most likely associated with emplacement of the ˜1740 Ma Burstall Granite (Maas et al., 1987; Schofield and Huston, 2010).

Granite-related mineral systems are strongly zoned, particularly at the district scale, where the metals are zoned relative to genetically-related granites. Typically, this zonation begins with the ore metal assemblage adjacent or within the granite and then grades to distal, low-temperature metal assemblage characterised by Zn, Pb and Ag. As examples, around carbonate-replacement Sn deposits (e.g., Renison, Tasmania), the zonation is Sn-W → As → Cu → Pb-Zn-Ag → Sb (Kitto 1998), and for intrusion-related gold deposits, the zonation is Au-Bi-Te →W → As-Au → As-Sb-Au → Ag-Pb-Zn (Hart, 2005).

In most of the hydrothermal deposits that form in the granite-related mineral system, critical commodities such as Sn, W and Mo are the primary product. The only exceptions are intrusion-related gold deposits, where, by and large, Au is the only recovered commodity. Figure 2.3.1 shows the distribution of other critical commodities in these systems, some of which may also be recoverable.

Like the porphyry-epithermal mineral system, Re may be recoverable in Mo-bearing deposits from granite-related mineral systems. As an example, a single analysis of Re in molybdenite in the Molyhil W-Mo skarn deposit (Table 2.2.1) yielded 13 ppm (D Huston, unpublished data). Taken at face value, this analysis suggests that the Molyhil deposit could contain around 0.14 t Re. The Unicorn porphry Mo-Cu-Ag deposit in northeastern Victoria could also contain a substantial Re resource. Cassiterite, wolframite and monazite has been recovered from the Climax porphyry Mo deposit, and commodities such as U, Be, REE, Nb and Ta potentially could be recovered from Climax-type deposits (Luddington and Plumlee, 2009).

Other critical commodities that possibly could be recovered in the granite-proximal part of the granite related mineral system include As, Bi and In. Arsenopyrite is a major component of many carbonate-replacement Sn deposits (Kitto, 1998), locally constituting over 10% of the ores. At the Stormont skarn in the west Tasmania Sn province, Bi and Au are the main commodities of interest (Table 2.2.1). This small deposit, which has a metal assemblage more akin to intrusion-related gold deposits, suggests potential for Bi in the west Tasmania and other hydrothermal Sn provinces around Australia. The Baal Gammon and Conrad resources include 38 ppm and 6.7 ppm In, respectively. In addition, fluorite is a common mineral present in many intrusion-related deposits, although generally as an accessory or minor mineral.

A common feature of all granite related mineral systems is the presence of (generally vein-type) distal Zn-Pb-Ag deposits. These deposits have supported historic mining districts such as Zeehan or Dundas in western Tasmania, but, at present, their limited tonnages (at most a few Mt) cannot support independent milling operations, although they have been mined recently when they can supplement the ore feed to a nearby mill (e.g., Rosebery in western Tasmania). These fissure vein deposits, like other Zn-bearing deposits (see below), are potential sources of Ga, In, Ge, Mn and Cd, although the tenor is not known.

Although the main products of magmatic-hydrothermal Sn-W deposits can overlap with LCT-type pegmatites, the associated metal assemblages are quite different. Pegmatite fields containing LCT-type pegmatites are commonly zoned around source granites from barren to Be-Nb-rich to LCT pegmatites (London and Kontak, 2012). In addition, individual pegmatites are commonly mineralogically zoned, although not in systematic patterns. Hence, at Greenbushes, Ta-rich zones are distinct from Li-rich zones (Partington et al., 1995). Critical commodities mined from LCT-bearing pegmatite-fields include Be, Nb, Ta, Sn and Li. In 2011, Australia produced 421 kt of spodumene concentrate. The Mount Cassiterite deposit is currently on care and maintenance, so no tantalite concentrate is currently being produced in Australia. At 31 December 2011, the EDR for Li and Ta were 1006 kt and 62 kt, respectively (Geoscience Australia, 2013).